Review by Amirah Mohiddin of "Dividing Lines," edited by Farhana Shaikh with a Foreword by C. G. Menon 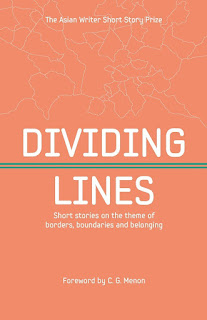 Dividing Lines is an anthology of short stories dominated by themes of divisions of caste, gender and race. This lyrical and haunting collection brings to the surface a deep appreciation of life as well as a fear of the future. Frequently dealing with conflicts based on oppression and betrayal, Dividing Lines is an evocative representation of Asian experiences.

My first impression of the short stories was full of excitement. It’s rare to see such a diverse collection of short stories, and each really gave a different view of culture. It’s difficult to find media representations which break down the walls of stereotypes. The themes of belonging and division are so strong in some stories such as Ashok Patel’s ‘Ninety Days’ and Serena Patel’s ‘The Other Side of the Bridge.’ These stories offer an insight into how racism can have devastating consequences for minority communities.

The stories are not only infected by fear but also a psychological burden that emotionally cripples the mood of the society they are set in. ‘The Other Side of the Bridge’ takes us into a bleak future while ‘Ninety Days’ tells the story of Idi Amin’s expulsion of Asians in the 1970s. Two of my favourite quotations from ‘The Other Side of the Bridge’ were: ‘I didn’t belong there and maybe I don’t belong here’ and ‘I don’t seem to be here or anywhere else anymore.’ These powerful lines in an all-round heart-wrenching story quickly became my favourites because of the pain they reflect. The scary in-between where you’re lost and can’t go back or move forwards particularly reached out to me due to my own hybridity as a British Asian continuously trying to find the balance between the expectations of British society and my deep-rooted Indian values and heritage.

Another story I really enjoyed was ‘Under the Same Sky’ by Farhana Khalique. I could relate to the soft and comforting childhood experiences and innocence. The use of space imagery and this idea that somehow we’re all connected through the sky no matter who and where we are added to its magic. I would definitely recommend the Dividing Lines anthology. It’s one of those collections that is an all-round emotional rollercoaster, featuring relatable characters and a wide selection of writing styles.

About the reviewer
Amirah Mohiddin, born in Birmingham, U.K., is a BA English (with Creative Writing) graduate. She is an aspiring writer, a storyteller for young children, a volunteering editor for Seeing Ear. Her latest project is about a female warrior in a fictional middle eastern war-torn kingdom.
Posted by Everybody's Reviewing at 14:39 No comments: 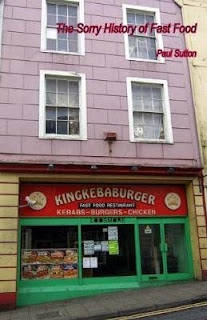 In her book The Poem and the Journey, Ruth Padel suggests that ‘all poetry is about loss: about being, at the same time, in one place and another you can’t get to, or can’t get back to.’ If this is true – and, like any generalisation, it is debatable – then poetry is always in danger of a nostalgic conservatism, looking back through rose-tinted spectacles to better places, pasts and people which have been lost. Not unlike the Daily Mail, with its constant harking back to a fake version of the 1950s, poetry’s present becomes a poor substitute for some utopian ideal which has been lost – something which perhaps never really existed in the first place.

Certainly, some contemporary British poetry is susceptible to this kind of nostalgic conservatism and backward-looking political quietism. By contrast, judging by his new pamphlet The Sorry History of Fast Food (Open House Editions, 2017), Paul Sutton’s poetry emphatically is not – even though it too is all about loss. His poetry is angry, politicised, nuanced, paradoxical, and ambivalent about both present and past – and hence about as far from a simplistic Daily Mail nostalgia as it is possible to get. Indeed, Sutton arguably satirises such monolithic nostalgia directly in his poem ‘Jupiter,’ where ‘Holst’s giddy joy,’ which seems to embody ‘pride, history and triumph, / … green English fields – / assurance, love, trust,’ is really ‘only a sound, / pure cadence; / just words.’ Though it inspires ‘old feelings’ in the listener, Gustav Holst’s famous piece of music seems to represent an Englishness, or Britishness which has only ever existed in music and words – an Englishness which has always already been lost.

Beyond the experience of Holst’s music, Sutton’s ‘old feelings’ of loss are much more complex, conflicted. On the one hand, the pamphlet is all about what has been lost through ‘the sorry history of fast food’ in modern Britain: with its urban gentrification, the ‘regeneration of King’s Cross / or even worse Paddington,’ its ‘frozen food,’ and ‘motorway service station[s]’ and their ‘invocation of oblivion,’ it would seem that ‘our true country’ has become ‘pure retail park, B & Q.’ Undoubtedly, this all represents ‘such a loss,’ for Sutton - but, on the other hand, the past itself is no golden age; the past itself is ambivalent, with its ‘coffee … [like] Thames mud,’ shops which had the ‘aroma of an old man’s crotch,’ the ‘rain [that] smelt like bomb damage,’ the ‘Victorian chophouse[s]’ and ‘Elizabethan / “offal and hoof quickbits.”’ In this respect, Sutton’s sense of loss might be termed a ‘dirty nostalgia,’ a harking-back to a past which was ‘loved … all the more for being so bad.’

This dirty nostalgia reaches its apotheosis in the poems ‘My Boy Jack’ and ‘Street Chicken,’ in which the narrators look back to Jack the Ripper, and attempt – nostalgically, as it were – to connect themselves with a frankly horrific past. In their narrators’ attempts to ‘trace [their] … history / through such disasters,’ these poems critique a poetry of loss, expose the dark side of poetic nostalgia.


About the reviewer
Jonathan Taylor's books include the novel Melissa (Salt, 2015), and the poetry collection Musicolepsy (Shoestring, 2013). He directs the MA in Creative Writing at the University of Leicester. His website is www.jonathanptaylor.co.uk.
Posted by Everybody's Reviewing at 14:14 No comments:

Review by Alexandros Plasatis of "Conjunctions:67 - Other Aliens" 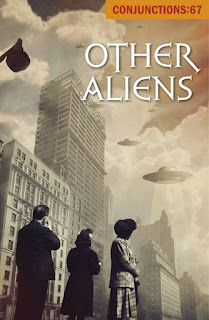 "Published by Bard College, with editorial offices in New York City and Annandale-on-Hudson, New York, Conjunctions is a cornerstone of contemporary literary publishing. Since 1981, the journal has been a living notebook in which authors can write freely and audiences read dangerously" Bradford Morrow, Conjunctions editor.

This starts with two stories by Leena Krohn, translated from Finnish by Eva Buchwald. Sweet beginning, I thought, foreign. Nice, slightly eerie stuff. The first story, a story that made me feel a little sad, is entitled In the Quiet of the Gardens and is about Sylvia’s private world as we see it portrayed in her own creations of miniature gardens.

Later on in the volume, in Clouds, by Julia Elliott, an earth-woman and a sky-man go in a tavern and get hammered on organic, biodynamic wine from a local vineyard where they bury bull horns crammed with cow manure to add to the taste (if you’re into this sort of stuff and you live near Valley Falls State Park in West Virginia, please visit the Red Wolf Tavern). After getting drunk, they end up in bed, where the earth-woman explores the sky-man’s anatomy: firm chest, uncircumcised erection. They have mammalian sex (with satisfying crescendos), and the earth-woman gets pregnant and gives birth to a half earth- half cloud-baby, Adelaide. The problems begin when the earth-woman meets her sky-woman mother-in-law. Ah, mothers-in-law, you always, always mess things up.

In Valerie Martin’s Bromley Hall, Americans Janet and Frank visit the UK, but Janet isn’t happy with the hotel room they stay in and wants to be moved to another one and this really pisses off Frank who, in order to punish her, refuses to go to Bromley Hall with her. Janet doesn’t give a shit and decides to go on her own. Big mistake, Janet. So she gets on a bus driven by a very weird Indian man, then the bus breaks down in the middle of the highway (motorway…) and Janet feels all adventurous and walks off to find Bromley Hall. This is when she really starts missing Frank, and she will miss him much, much more when she gets to meet the DNA samplers…

Tinkerers by Lavie Tidhar takes place on the Mountains of the Moon. Atmospheric night-prose here, with farting horses, donkeys, scorpions, caiques, and the Stranger in a lonesome journey, riding away from the Doinklands and into wild, dark forests, until he comes across a couple of tinkerers (dwarfs) and their wagon. I liked these two characters, the dwarfs, they were funny and scary at the same time. I felt blessed being a smoker while reading this story – that bit about the pipe stuffed with cherry-flavoured tobacco got me going.

Tinkerers is followed by an interview with Samuel R. Delany, conducted by Brian Evenson, which I found very, very interesting and informative, and, actually, an entertaining read. After that, there is a sad story with a very beautiful ending, Matthew Baker’s Transition.

50 pages of Conjunctions 67 consist of a selection of letters from James Tiptree, Jr. (the pen name of Alice Bradley Sheldon) to the feminist SF writer Joanna Russ (who, for most of the time, didn’t know that Tiptree was a woman). Nicole Nyhan did a great job gathering and slightly editing those letters. There are many moments in those letters where the writing is beautiful and sharp, and there’s plenty of advice for writers.

The Process Is a Process All Its Own, by Peter Straub, is another beautiful story in this volume. It’s a horror story (I went to the toilet 4 times) that won’t let your mind drift away, and which, sometimes, made me smile with its clever prose (Only the strongest, most distinctively individuated, if that’s a word, of individuals can control the colorations of the words that pass through them).

In the pages of Conjunctions you will also find Madeline Bourque Kearin’s first ever literary publication. Her strength, I found, lays in beautiful descriptions: “I watched the buds on trees open and close like grasping fists and watched the pink blooms of rhododendrons yawn in and out of existence.”

Joyce Carol Oates is a long-time Conjunctions contributor. I never read any of her stuff. For some reason I had this idea that her writing was King Kong-like, you know, dark, with heavy balls, and sloooow, one step …zzzvvvbooom… another step half an hour later, zzzvvbam…. The Undocumented Alien was nothing like what I imaged though, the prose was lively and funny and energetic, zip zip zip, mosquito-sounding-like, minus the annoyance.

I won’t write anything about E. G. Willy’s short story Radio City, except to say that I’m an admirer of his work now. Great style there, fantastic dialogues, a pure joy, fantastic, great fiction, amazing, amazing, so good (that’s my Trump impersonation).

There are many more beautiful stories in there, there are poems, a play, interviews and discussions. I’d like to close with an apology to those contributors that I didn’t mention in this little review of mine.

I’m not a big SF, fantasy or aliens reader, and, still, I’m glad I have a copy of Conjunctions 67.

About the reviewer
Alexandros Plasatis is an immigrant ethnographer who writes fiction in English, his second language. His work has appeared or is forthcoming in UK and American anthologies and magazines: Meat For Tea, Meridian, Aji, Adelaide, Bull, Unthology, Overheard: Stories to Read Aloud, Crystal Voices, blÆkk, Short Fiction in Theory & Practice, and Know Your Place: Essays on the Working Class by the Working Class. He is a volunteer at Leicester City of Sanctuary, where he helps find and develop new creative talent within the refugee and asylum seeker community. He lives in Leicester, UK.
Posted by Everybody's Reviewing at 00:47 No comments: