Alex Bliss is a writer and producer. He is co-director of Original Ink, a theatre production company who have supported local writers, directors and actors by producing evenings of short plays which include: Hashtag, Mashed and The Meltdown Test. He has written plays for the 14/48 at the Y Theatre and currently works in events at Curve in Leicester. He is writing the book for a new musical soon to be performed at the Sue Townsend Theatre called Madeline and Joe, which revolves around a relationship between a young couple trying to conceive. 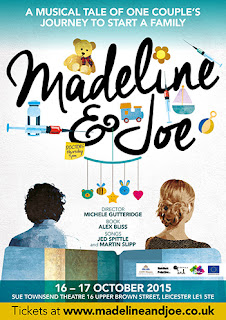 LB. What inspired the story between Madeline and Joe?

AB. I was writing a musical with Jed Spittle about a band. The plot revolved around the members of the band and their lives in and out of the group (think Almost Famous but set in the 80s in Ibiza). We managed to get funding from the European Regional Development Fund to stage the musical, but quickly realised that the idea was too large - especially as we wanted the actors to also play the instruments.

There were two characters in that original story who were, for me, the most interesting characters: the most complex and real; and they had the most powerful storyline in the piece. That of, trying and failing to have a baby.

LB. Why a musical?

AB. Musicals, with some notable exceptions, have a reputation for being frivolous, superficial; all jazz-hands and kick-ball changes. There are very few musicals which try and address a challenging subject, such as infertility. Then, when writers do try to change the status quo, the project fails commercially. For instance, there was a musical called Next to Normal which dealt with a mother with bipolar disorder. The show won a Pulitzer Prize, but flopped commercially. I want to try again with a musical with a serious subject matter. I believe that a good musical should have a song at a moment of high emotion (whether that's happy or sad) as the characters need to reach for more than words in that instance and that's why I felt it was important to write this as a musical.

LB. We did our undergraduate and postgraduate degrees together and have been set similar assignments during our education, which mostly involved writing alone. I want to know how it is working in close collaboration with the other people involved in this project.

AB. It is challenging! But also very rewarding. So, we have Jed Spittle and Martin Slipp who have composed the songs and Michelle Gutteridge, who has directed the show and the main problems come when everyone is looking at the idea from their own point of view; from their discipline. We're all opinionated and a big bone of contention in the writing of the piece has been about the ending. We couldn't agree on whether it not it should end in a positive way; with there being strong opinions and arguments for a happy ending and the opposite.

Eventually, I wrote a new ending and then went to visit my parents in Devon. I sent the new scenes by email and heard nothing until I met up with the group for a rehearsal. We try to be as collaborative and inclusive as possible, but everyone had either added in or taken aspects from the new ending I wrote. At first, I was annoyed! We should've spoken about it first. However, when the actors played it out, I realised it was so much better and now we have an ending we're all proud of. And it's a lovely thing to know that it was a joint effort.

LB. How tough has the research aspect of the project been? Are you all clued up on ovulation and conception now?

AB. All I know is: ovulation is extremely complicated! I try not to get too bogged down into the medical jargon and have focused more on visiting forums and websites where couples going through IVF and fertility issues talk about their experiences. Some of the lines from the musical have come from being inspired by the emotions conveyed through those blogs and forums. Such as: "£6000 down the drain and our arms are still empty."

LB. You are co-director and co-producer of a theatre production company Original Ink. As Original Ink is acting as producer of the show, how easy is it to marry both roles as writer and producer?

AB. You have to go beyond what you want to write when you're thinking as a producer. A producer is about the bottom line: what sells. And so, as I'm writing, I'm fully aware of this.

There's also the stress of trying to promote the show whilst writing it. I have to prioritise writing social media statuses over re-writing scenes sometimes and that can be a hard way to think, as a writer. I had to console myself with the fact that there's no one to throw a hissy fit at, as I'd just be throwing one at myself!

It's also very easy to lose the quality of the show; or the perspective of the quality of it. I've seen it and read it so many times I sometimes don't know what to think of it. What was invaluable was being able to workshop the piece and showcase it to family, friends and industry professionals at Curve. I think this entire project has been a learning curve in collaboration and taking on constructive feedback and just having the balls to show something you've created to a group of people and honestly asking: "How can this be better?"

About the interviewer
Lauren Bird is a writer and musician from Leicester. She has written and directed two short plays which were produced by Original Ink and performed at Upstairs at the Western. She performs in various covers and originals bands in Leicester and currently works at the University of Leicester library.
Posted by Everybody's Reviewing at 06:56