Review by Robert Richardson of “a token of concrete affection,” an exhibition at the Embassy of Brazil, London, 20 November – 18 December 2015 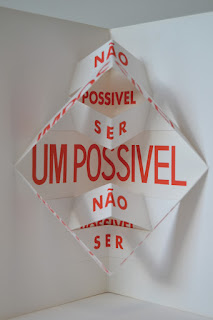 In the early 1960s, Stephen Bann was a student at Cambridge University, and during this time he understood the importance of concrete poetry, which was then a fairly recent development in literature. From the outset, Bann's involvement included editing and writing critical articles about art and literature and co-organising with Mike Weaver, Reg Gadney and Philip Steadman the First International Exhibition of Concrete, Phonetic and Kinetic Poetry at St. Catherine’s College in 1964. His subsequent successful academic career (he is currently Emeritus Professor of History of Art at Bristol University) also continued his interest in the direction of research and writing.

The enthusiasm of those early days led to Bann’s contact with many of the most significant concrete poets, and he also acquired an incredible personal collection. From this, it is the work of the historically significant Noigandres group that is the main focus of an exhibition currently showing at the Brazilian Embassy in London, along with a selection of Bann’s correspondence with these poets. The title of the exhibition, a token of concrete affection (following the Bauhaus preference for all lower case), is from a letter written to Stephen Bann, almost fifty years ago, by poet Pedro Xisto.

Concrete poetry became an international movement, but it sparkled away from the predictable New York/Paris/London nexus. As well as the Noigandres poets in Sao Paulo, Brazil, other leading concrete poets were Eugen Gomringer in Ulm, Germany and Ian Hamilton Finlay in Edinburgh.

The common ground was that visual/typographical dimensions to language were realised as literature, and the page became a liberated arena. This is the case with such poets as Pedro Xisto and Edgard Braga. With the work of Augusto de Campos, and especially his collaborations with Julio Plaza, there is a distinctive Brazilian approach: by combining words with a deft cutting and folding of paper, the poems are also sculptural. It is wonderful that these artworks remain so surprising and fresh.

As a symbiosis of thought and language, concrete poems are words and letters at play as never before, and a sharing of delights and perceptions. The writer and curator Bronac Ferran is to be congratulated: working closely with Stephen Bann and the Brazilian Embassy’s cultural section, she has presented this work in a way that is not only coherent, but also communicates its optimism.

About the reviewer
Robert Richardson is a visual artist and writer. His work is included in Artists’ Postcards: A Compendium (edited by Jeremy Cooper, published by Reaktion Books, London). He is also the co-editor, with William Pratt, of Homage to Imagism (AMS Press, New York). In 2014, his solo exhibition TextSpaces was exhibited at Eugen Gomringer’s Kunsthaus Rehau in Germany.

Posted by Everybody's Reviewing at 11:55