Review by Stevie Fists of “Jumping Through Hoops” by Alex Hales 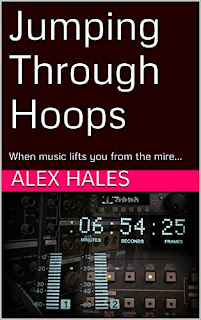 “Whatever does claim me is probably already biding its time.”

I love a good music book, regardless of how the subject’s persona sits with you: take Danny Baker’s memoirs for example, which don’t strictly adhere to a straight musical formula, but are a rollicking read even if (by his own admission at one point) he can sometimes get a bit waspish. Never mind. There are other musical tomes of a piece and similar vintage to Baker’s that are sour or dismissive enough that you wonder why you bothered, and I trust you to be capable of forming your own opinions. I mean, that really is the sum total of these collections anyway. Opinions.

Jumping Through Hoops is an altogether different beast. Written by Alex Hales, it’s a slim, Kindle only (for the moment) effort of around 100 pages, containing 45 bite-sized pieces around different songs from different eras, all bound together by themes of personal significance and some kind of emotional resonance. Whilst I think it safe to assume that this isn’t a sideline for the England cricketer, I do note that this Alex seems to dislike himself a great deal. I wonder why. I sense it in his ruminations on death (“whatever does claim me is probably already biding its time”).

Mostly, as Hales himself acknowledges in his intro, “the dark clouds of depression and anxiety” are the ones that most colour Jumping Through Hoops, and it’s a shame for the writer who exhibits occasional acuity, not least in a piece about Scroobius Pip who of course is himself an enlightened commentator on the creative struggle, and in whose tune “Porter” Hales has found a “lightness of touch … mirrored by the conscience apparent in Pip’s narrative.” I can see what he means. Hales seems unsure, as if he’s holding back due to fear. But, fear of what?

Later in Jumping Through Hoops, he shows that the bit is between his teeth, and in a piece about – of all people – Half Man Half Biscuit, Hales speaks of the difficulty of articulating what those “dark clouds” are like, outside of their immediate context, and of hearing himself trying to do just that. I understand this – the struggle’s real enough, and all-enveloping, yes, but as a fellow sufferer I can attest to the “finding of redemption in a rage against the dying of the light.”

This book is not all self-flagellation – whilst it may be a stage the writer needs to get through before delivering the other projects mentioned on his Kindle author page (http://goo.gl/661elY), it would grate after a while.  However, there’s some great variety and depth in Jumping Through Hoops, with Krzystof Penderecki jostling for space alongside Queens Of The Stone Age and Pet Shop Boys alongside Big Yoga Muffin. Hales has a YouTube playlist for the book (http://goo.gl/KeujOX), and on the above author page there are further projects promised, including a third title – Liars’ Bar – in spring 2017.  You can do worse than to read his offerings.

About the reviewer
Stevie Fists is a retired doctor of engineering, of ineffable origin, and splendidly/horizontally resident in North Staffordshire.

Posted by Everybody's Reviewing at 00:11