Review by Lee Wright of "Freedom of Movement" by Reuben Lane 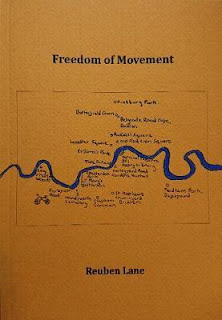 London, 2018 and uncertainty is everywhere. As Theresa May announces her Brexit plan, Reuben Lane walks the streets, from Clapham Common to Brixton, living an apprehensive existence. Freedom of Movement is a curious self-published book, part micro-memoir, part everyday diary. It would probably find a home somewhere between Laurie Lee’s As I Walked Out One Midsummer Morning, Elizabeth Smart’s By Grand Central Station I Sat Down and Wept, and Will Self’s Walking to Hollywood.

Able to be read in a single sitting, it begins in the National Theatre foyer, as a security guard’s walkie talkie crackles, vacuum cleaners hum and people argue over the proper way to dispose of ice-cream cartons. The author moves all across the capital, an undertone of trauma following him from a canteen in Russell Square, to the streets around Millwall football stadium. There are inner battles being fought alongside everyday observations, like a Romanian plasterer arguing on his mobile phone while the author eats a deluxe vegetable burger at a McDonalds. At times the prose dips into (poet) Charles Boyle territory: “My cotton tote bag that I have stuffed with some dirty underwear; a couple of carrots, a root of ginger; a towel; a paperback.”

There are tales of DIY mishaps in West Dulwich and morally polluted thoughts like artistic cannibalism. An old man calls a black girl “bitch,” while she shouts back, “Old man, you should be ashamed of yourself.” At times, the book reads like an overheard conversation you wish you hadn’t heard. Yet there are still glimpses that this could have been a fidgety mini-epic, perhaps with a little more time. If this book leaves you with the sense that Reuben Lane’s story is unfinished, perhaps that’s because it is.

About the reviewer
Lee Wright was born in Nuneaton, Warwickshire in 1980 and has been writing both fiction and non-fiction since 2008. He has an MA in Creative Writing from the University of Leicester.

Posted by Everybody's Reviewing at 11:45