Review by Jonathan Taylor of "No Guiding Star" by John Mills 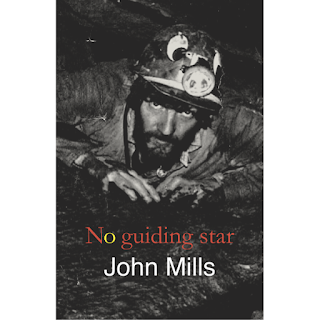 In Awakenings, the neurologist Oliver Sacks suggests that ‘if we are to achieve any understanding of what it is like to be Parkinsonian, of the actual nature of Parkinsonian existence (as opposed to the parameters of Parkinsonian motion), we must … meet [patients] … in a sympathetic and imaginative encounter …. They can tell us, and show us, what it is like being Parkinsonian – they can tell us, but nobody else can.’ This is precisely what John Mills succeeds in doing in his new pamphlet, No Guiding Star: he tells us, through poetry, ‘what it is like being Parkinsonian.’ In many of his poems, Mills, who has had Parkinson’s disease for some years, gives a voice to sufferers – and, in that sense at least, No Guiding Star is an important work.

Mills captures from within what it feels like to experience Parkinsonian symptoms – the tremors, shakes, shuffles, and so on:

The pronoun ‘it,’ used throughout this poem (‘And then’), is ambiguous: on the one hand, it refers to the illness itself; on the other, it also reflects the dehumanising objectification of the sufferer, through both his or her symptoms and others’ perceptions of those symptoms. Personified in another poem, the illness declares to the sufferer: ‘you are mine / to dispose of / as I wish’; and, to the well, the sufferer becomes an ‘it,’ a ‘thing’ to be ‘laughed at,’ to be stared at, to be ‘nod[ded] sagely’ over. As Mills makes clear in the poem ‘Conjugation,’ the sufferer’s symptomatic ‘fumbling is comical,’ so that ‘I laugh / You laugh,’ while ‘He cries.’

This is all part of what Mills calls ‘Parkinson’s progress’ – the gradual, degenerative aspect of the disease, as it progresses from one symptom ‘and then’ to the next, 'and then' to the next, and so on. ‘Conjugation,’ for example, moves from ‘the beginning,’ where ‘the verb was / Shake,’ through stares and ridicule, to the final verb ‘He cries.’ The disease is, in effect, a narrative, a story, not unlike Bunyan’s Pilgrim’s Progress, moving from symptom to symptom, episode to episode. Sacks claims that ‘we must deepen a case history to a narrative or tale,’ in order to understand neurological illness – and, again, this is exactly what Mills achieves, in miniature form, in his poetry.

If ‘And then’ tells the story of degenerative illness in linear form, other poems capture the stops and starts, the non-linearity of Parkinson’s, as it both ‘progresses’ and loops back on itself. In ‘Nothing on my mind,’ for instance, Mills plays with the order of repeated lines in each stanza to alter their implied meanings:

Time creeps up on us all
although it is all consuming
let it pass
nothing concentrates the mind.

Again, the pronouns here are significant: on the one hand, Mills is speaking for himself (‘I’), but on the other, ‘time creeps up on us all’ – we are all implicated in his personal experience, all of us subject to time and its degenerative force. There is a similar implication in the poem ‘What dreams may come,’ where ‘It is not the book / that trembles in the night / but the reader.’ The reader is both Mills and ‘us,’ we who experience the tremors, the symptoms, the illness through Mills’s vivid poetry, ‘meet[ing] them,’ as Sacks says, ‘in a sympathetic and imaginative encounter.’

What Sacks emphasises above all is that doctors – and, by extension, the wider public too – need to encounter the sufferer of neurological illness as an ‘individual,’ as a ‘“who” as well as a “what,” a real person.’ The Parkinsonian is not ‘only’ a Parkinsonian for Sacks, but also an individual, whose existence is not defined entirely by illness, who has a life beyond that illness. Mills’s pamphlet once again enacts Sacks’s theory, by featuring beautiful poems about pot-holing, blackberrying, and familial grief, alongside the poems about Parkinson’s disease. Mills’s pamphlet hence not only allows the reader to share and understand that disease ‘in a sympathetic and imaginative encounter,’ but also to share and understand the person beyond the disease. Whether or not some of the experiences of the person beyond, in pot-holing, for example, have things in common with the experience of Parkinsonism – whether or not they share certain imagery with the illness and its symptoms – is left to the reader to decide.

There are no guiding stars
no landmarks
just blackness and a tunnel
you wear like a straitjacket.