Review by Katherine Hetzel of "Marmalade Skies" by Gus Gresham 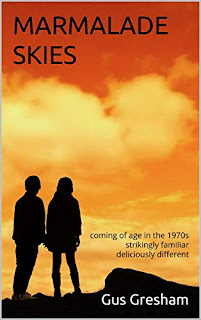 It took me a while to get into this story, as to begin with it didn’t really feel like a story as such – more a stitching together of scenes of childhood from a time I well remember living through myself. I used to play ‘over the fields’ too (rather than in the woods) with a gang of friends, witnessed school-lunchtime fights and the chanting that went with them, played my LPs on the record player, watched my dad carry home a Party Seven …

I’d describe it as a young ‘coming-of-age’ novel, as it follows Vonnie and Matt through most of their first year in senior school. They face a variety of challenges – some mere inconveniences, others more serious – at home and in school during this time. Such as, how many new pennies are in half a crown? What’s the best way of dealing with communal showers after PE? How to keep out of Skinner’s way when he’s had too much to drink? Will mum ever be brave enough to leave him? And can you really parachute off the extension roof using a tablecloth? (You can’t).

Gresham describes the day-to-day living and schooling in detail, capturing the mood of the era well. At times – for me at least – there was a little too much of this description and not enough story; the descriptive scenes didn’t always help to move things on. They felt more like an indulgent meander down memory lane rather than an integral part of the novel in some places. The voice of the novel feels much older than that of the 11 year old characters, and could therefore impact on the age range of the target audience, but if a child today read this as a study of their grandparents’ childhood … I think they’d be left gobsmacked at what we used to get up to.

About the reviewer
Katherine Hetzel writes fantasy adventures for middle grade readers and is a founding member of NIBS, a small creative writing group in Loughborough. She blogs about life and writing at Squidge's Scribbles and enjoys working with writers of all ages to enable them to tell their own stories. You can see her books here.
Posted by Everybody's Reviewing at 02:32