Review by Rachel J. Fenton of "Yes But What Is This? What Exactly?" by Ian McMillan 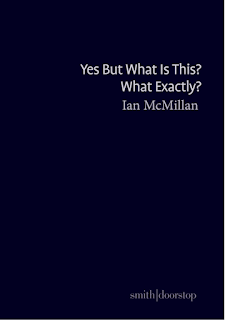 With its searching title, Yes But What Is This? What Exactly?, Ian McMillan’s Smith and Doorstop pamphlet asks what a lot of Brits did, indeed a lot of us everywhere did, about Brexit, capturing the regional and international mindset from the kick-off (yes, there’s football among these 16 poems, more on that in a minute).

One of the strongest Brexit poems, 'Between Junction 35a and Junction 36,' begins: 'The truck pulled up on the hard shoulder / and a curtain at the back opened theatrically,' exposing the racist pantomime put on by some pro-Brexit politicians who would have the media believe migrant workers and refugees were to blame for the government’s throwing the UK into financial ruin.

Financial crashes have historically been linked to the government’s funding of its military interests, and McMillan hints at this 'A Financial Crisis in Three Parts,' with the line 'They smile before / they start the waterboarding.'

But there’s much more to this collection than money and Tories. There’s a sense that McMillan goes more personal with these poems than usual. Yes, there’s his hallmark funny observations, but there’s some real evidence of a man reflecting not only on how he arrived at the present time, but where he wants to go; something of a referendum of the heart takes place in just twenty-five pages.

McMillan’s known as a Barnsley poet, but his concerns here, while grounded on home turf (another football reference), speak of more global issues that enable him to demonstrate his emotional intelligence as well as his wit, which, when it comes to gender isn’t always as on point as his geo-political politics, but it’s a small point given the empathy shown in this collection.

His empathy for a player subjected to racial abuse during one of McMillan’s beloved football games replays in four stanzas, as if slow-motion, the moments leading up to the attack, grounding them in the poet’s living room. McMillan’s skill in ‘Lighter’ is that he makes the reader feel the action is happening in their living room. The only disappointment of this collection is that just when you think it’s all over, sadly it is. You’ll wish there were more poems.

About the reviewer
Rachel J Fenton is a writer from South Yorkshire now living in Aotearoa New Zealand. Her poems have been published in English, The Rialto, Magma, and various anthologies, and her pamphlet Beerstorming with Charlotte Brontë in New York is forthcoming from Ethel Press in April 2021.

Posted by Everybody's Reviewing at 02:12