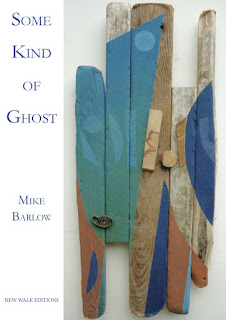 You don’t necessarily need to be a champion of poetry in order to appreciate this new collection by Mike Barlow. To a certain extent there are a lot of false hang-ups linked to poetry. Some readers can feel beaten before they have reached the second page. Where Mike Barlow is concerned, however, and this collection in particular, there is no “beating around the bush.” He is good at describing what he sees with minimum fuss. In his latest collection from New Walk Editions, Barlow slows everything down into basic language and everyday emotions.

A former winner of The National Poetry Competition, Barlow's poems have staying power:

Ella who finally left home at sixteen with nothing
but a pocketful of change and the rag doll of her childhood.
May she find the latchkey in her purse one day
and courage enough to use it.

Poems that are about the most honest of moments:

With my scars,
tattoos and broken teeth
I’d have been a son my mother feared for.

For some, writing poetry is a form of therapy. Not so with Barlow. With these poems, it is as though we are all family members, gathered around a death bed, only this will be a New Orleans jazz funeral, with trumpets and dancing and multi-coloured parasols and handkerchiefs twirled in the air.  Barlow’s gifts are on full display here, as he cuts the body loose:

So I slow down, tip-toe the long hall to the scullery.
And there’s Aunt Dora washing plums. I knock
on the old plank door and hold my breath.
She’d always ignore me when she knew
I was making things up but this time she turns,
hands me a bowl of glistening Victorias to stone.

Barlow does a good job of showing us what others are thinking:

Les, fitter who didn’t fit, chucked the factory job, his mates,
the lies and moved away where he could be
Lesley. Shaven legs, coiffed hair, skirt and blouse,
the bare truth of lipstick and mascara.
A shout for her, a shout for her.

All the poems here (even the ones that shouldn’t work, like "There’s that scene in One Flew Over The Cuckoo’s Nest where McMurphy first realises the deaf and dumb Chief Bromden can hear and speak") have a deceptive ease about them. They can be at times sombre, yet they still leave you itching to read them again.

It is true that all poems should make you think. And that is something which resurfaces again and again over the nineteen poems. On a deeper level, the pamphlet could be seen as a meditation on what life is like for the people left behind after the death of a loved one, squeezed between ordinary observations like in the poem "Encounter," which opens with a quote from a plaque on a bench in Drinishader, on the east coast of Harris, in the Outer Hebrides: "On this bench 22nd October 2008 Angus Forbes proposed to Athlone Findlay in the rain." What follows is a masterful poem about sweethearts, that was fuelled by a chance encounter while walking through a park.

But what is the trick to good poetry? Barlow himself tells us the trick in one poem: "The trick? The trick’s to keep it simple." And by sticking to that rule, he has fashioned a collection that will leave any aspirant poet wishing that they too might be able to achieve similar with mere words.

About the reviewer
Lee Wright was born in Nuneaton, Warwickshire in 1980 and has been writing both fiction and non-fiction since 2008. He is taking an MA in Creative Writing at the University of Leicester.
Posted by Everybody's Reviewing at 13:33 No comments:

Review by Heidi J. Hewett of "The Plankton Collector" by Cath Barton 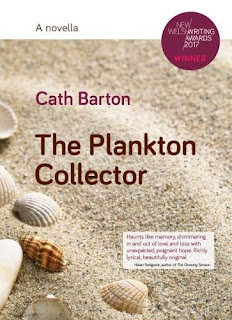 I had been meaning to read this novella, which won the New Welsh Writing Award in 2017, and I kept putting it off because it’s about grief - it would be late, just before bed, and that sounded depressing. But it turns out the book is anything but. From the very first sentence, it’s like being able to crawl into the lap of your grandmother or grandfather in a rocking chair. There’s a flow to the language which is like breathing in and out, or rocking gently in a boat, and then the characters are drawn with such subtly, honesty, and compassion. Even though the central event of the book is coming to terms with death, it was the David and Rose—the quiet disintegration and equally quiet rebuilding of a marriage—that had me riveted. This is a short, utterly original, very human, marvellous book.


About the reviewer
Heidi J. Hewett writes science fiction, mysteries, and romantic comedies. When she is not reading or writing, she plays the violin, inspired by Sherlock Holmes. She also enjoys tinkering with recipes and inflicting strange food combinations on her hapless family. She is a member of RWA.


Posted by Everybody's Reviewing at 13:04 No comments: 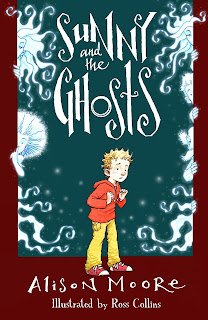 It is said that a good writer can turn their hand to any genre, and with her debut children’s book, Alison Moore has put that to the test. There has always been a child-like innocence to many of the protagonists in Moore’s adult novels. This time, however, she has come full-circle, making the protagonist a child in a child’s story.

Sunny and the Ghosts tells the story of eight-year-old Sunny, whose parents buy an antique shop in Devon, and move into the flat above.

Sunny’s father likes old things. He plays old songs when driving around because it “Makes the van feel happier.” His mother likes the butterflies which are preserved in frames, while Sunny helps around the shop, polishing the antique furniture - one of which, a blanket box, has a stowaway ghost inside (the first of six), named Herbert.

Of course, Sunny’s parents don’t believe him, even when the Victorian piano begins playing by itself during the night. We swiftly meet Walter, Violet, the sisters Mary and Elise, and finally Peregrine.

Moore keeps the story ticking over (quite literally in the episode with the antique cuckoo clocks), always conscious of her readership. Along the way, strange things happen, like an invasion of stray cats into the shop, “First it was ghosts,” says Sunny’s friend. “And now it’s cats.”

Sunny also attempts a day trip to the seaside for the dead, all accompanied by the illustrations of Ross Collins, who adds a George Adamson style quality to the story.
And Moore’s literary influences are sprinkled throughout this book. Herbert the ghost’s favourite novel is Wuthering Heights for instance. Macbeth and Hamlet are mentioned, so too A Christmas Carol. And one of Sunny’s new ghostly friends gets trapped in the stationery cupboard while looking for notepaper to fulfil her beyond the grave ambition of writing a book. An encounter which leads to one of the funniest lines:

A further influence can be found in the creation of the infuriating Mr Ramsbottom (and what seven-year-old wouldn’t titter at that choice of name?) who comes across as a combination of Mr Gruber and Mr Curry from Michael Bond’s Paddington Bear series.

This book also draws on Moore’s last two adult novels. Death and the Seaside and The Missing both explore that place where the real and fictional worlds meet. And since being propelled into the spotlight in 2012 when she made the Man Booker Prize shortlist, alongside well-known heavyweights like Will Self, Deborah Levy and eventual winner Hilary Mantel, Moore has developed an almost cult fan-base that’ll surely buy her work, whether children’s fiction or not.

And even though this is Moore’s first foray into children’s literature, it certainly won’t be her last. A follow-up book, also to be published by Salt Publishing and titled Sunny and the Hotel Splendid is already in the works. A tidy stream of adult novels and children’s books looks set to continue from the prolific former Man Booker Prize short-listed author.


About the reviewer
Lee Wright was born in Nuneaton, Warwickshire in 1980 and has been writing both fiction and non-fiction since 2008. He is taking an MA in Creative Writing at the University of Leicester.

Posted by Everybody's Reviewing at 09:05 No comments:

Review by Hannah Stone of "prison recipes" by Jeremy Paden 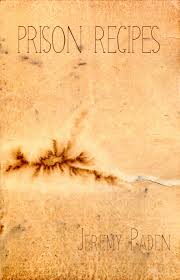 How does one capture the pain, confusion, and brokenness of Argentina’s Dirty War?
Jeremy Paden’s prison recipes explores this dark time of turmoil.

Throughout his chapbook, shocking images are portrayed in lines slashed to pieces, seeming to represent a broken state of mind while in captivity. His “how-to” poems often lead to unimagined places, transforming simple items into unfamiliar territory.

From the generous detail Paden provides, it’s clear that he spent a considerable amount of time researching the conditions of Argentine prisons. In “on the need to clean everything from your mess plate,” he shows the reader the frightening image of prisoners grinding and eating eggshells in order to get enough protein and minerals to survive:

This world of hard survival is unfamiliar to most readers, but Paden makes it accessible with clarity and detail in his writing. He creates an artful balance between clarity and ambiguity in his poems, leaving some parts open to imagination.

Paden also shows how violence affected those outside of the prisons. During this time in Argentina, countless families were torn apart by war. His poems often represent a yearning or searching for lost loved ones. In “poem 2 after juan gelman’s carta abierta a mi hijo,” Paden writes,

I turn about on my bed/ I twist
through these city streets/for waking
& sleeping is now the same to me/
where are you?

These haunting notes of longing give a human face to these prisoners. Paden’s close attention to the emotions and thoughts of his subjects makes his poetry effective and poignant. Throughout his chapbook, Paden is true to the struggle and pain of his subjects.


About the reviewer
Hannah Stone is an undergraduate student of Creative Writing in Cleveland, Tennessee. She enjoys poetry and fiction, and hopes to pursue an MFA upon completing her undergraduate program.

Posted by Everybody's Reviewing at 08:54 No comments: