Review by Rachel J. Fenton of "It's Not Personal" by Nigel Pantling 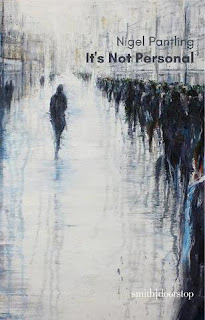 I’m one of those readers – you know you’re out there – who approach a book by an author you’ve not read much by before as if the opening scene in a mystery. Every word’s a clue to some deeper meaning or part of an elaborate plot reveal. Nigel Pantling dedicates his poetry collection It’s Not Personal to ‘my sisters,’ so it was with the curiosity of Miss Marple that I read ‘Something My Girlfriend Said to Me’ and found my head tilting to one side in the manner of Joan Hickson circa 1985 – Agatha Christie’s Letters of Death to be precise – as a small alarm bell went off in my head. Thought I, why then is this the first poem? It is, as Hannah Gadsby would say, 'A choice.'

By the end of the second poem, ‘First Times,’ I was debating with the last lines then reasoned with the poem’s speaker. Age, inexperience, lack of insight, this could progress to greater understanding; there’s scope for a great character development arc. But the fact was, this book had to convince me to read on. And it did.

‘Differences,’ like track five on a music album, came a few pages in and made me wish it had come first. ‘Icebergs’ marks a break in tone akin to Marple overhearing smut then discussing it in the vicarage: ‘there she is at the bar with someone / sparkling in conversation. He realises / how little they’d talked, how much stayed hidden.’ The following poems feel like they’re out of one of Christie’s books; the reader must work to make the links but they’re there no doubt, and these poems are building towards something. At page 31, it hits you, in the short simple lines of ‘Death in the Family.’ I cried. Sufficed to say, there are no sisters.

At times the poems' speakers are like Christie’s suspects; many give the reader motive for dislike. But in a collection of 73 pages, there are more mysteries and more to intrigue than give flight and page after page, it’s the craft of the poet that will keep the reader on the edge of their seat.

About the reviewer
Rachel J. Fenton is a writer from South Yorkshire now living in Aotearoa New Zealand. Her poems have been published in English, The Rialto, Magma, and various anthologies, and her pamphlet Beerstorming with Charlotte Brontë in New York is forthcoming from Ethel Press in April 2021.

Posted by Everybody's Reviewing at 02:59