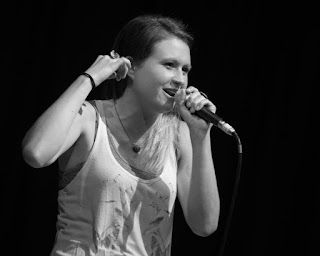 Jess Green has performed at Glastonbury, Latitude, Bestival and the Edinburgh Fringe and in 2014 her poem, Dear Mr Gove received viral attention on Youtube and has now reached more than 300,000 hits. The poem was taken from her critically acclaimed poetry and music show, Burning Books, which she performs with her band Jess Green and the Mischief Thieves. Burning Books received a host of 5* reviews at the Edinburgh Fringe in 2015 and was toured nationally at the end of last year.  Her first collection of the same name was published by Burning Eye Books in September 2015 and was shortlisted for the East Midlands Book Award 2016. She has written for Channel 4 and the BBC and her work has received acclaim from artists such as Josie Long and Scroobius Pip. She is now working on her first full length play.

“Punchy, she struck a chord” – The Guardian


AP. You write mainly poems for performance. Why’s that?

JG. I like the performance element of writing. I like that it's immediate, that it adds an extra dimension to the art form. I think it helps to engage people in poetry who might not otherwise. I'm also interested in the rhythm and sound of language and that's something that can be explored through performance.

AP. How do you prepare for a performance? What’s the rehearsal process?

JG. I tend to learn poems off by heart so just lots and lots and lots of practice. I learn poems until I'm bored of them, until I can recite them backwards or at full speed or from half way through to minimise the chance of forgetting the words on stage (which does still happen occasionally).

AP. What are the feelings you usually have while performing alone to a live audience?

JG. It depends on the audience! Usually I really enjoy it. I guess it is an adrenaline rush because it could all go horribly wrong but most of the time it doesn't. I really love performing and if people enjoy hearing me perform then that's a bonus!


AP. Do you have similar feelings while you’re up there with you band, the Mischief Thieves?

JG. I find performing with the band a totally different experience and quite a bit more stressful. As there's three of us and the stuff we do relies heavily on us all being in time and not missing a beat it's much easier for stuff to go wrong and a lot harder to cover it up. I also find it harder to remember the words while I'm trying to make sure I'm in time with what's going on musically. I am a real practise bore with the band. I make us practise and practise and practise before a gig until we're as tight as we can be. There have been times when we've totally cocked it up on stage and a piece has grinded to a hault (it's usually my fault) but the audiences have always been very friendly about it.

AP. Do you feel limited within the band structure sometimes?

JG. I'm going to contradict myself now. I love playing with the band. I think music adds another dimension to performance poetry and Dave and Scott are such talented musicians. I should probably give them a plug here. Dave Morris (@drumsbydave) on drums and Scott Cadenhead (@scottcadenhead1) on guitar. The stuff they can do is brilliant and I think they again help us to engage people in poetry who maybe otherwise wouldn't be.


AP. How do you feel when being on camera?

JG. I'm not that fussed. If it's a live performance and I know I'm being filmed that can add an extra layer of pressure to making sure it's a good performance but if it's making a poetry film or something then it's not that different to just performing at home in your living room! There are some terrible videos of me around the internet but there's no point feeling stressed about it!

AP. You toured Burning Books with your band and I read all the positive feedback and critiques. Were there any bad moments that stick in your mind from the tour?

JG. Hmm. Not that I can remember. We had the odd stressful moment. Scott and Dave both have full time jobs so we were often doing gigs and then driving back across the country through the night to make sure they could get to work in the morning which was a bit of a drag. By the end of the tour I was quite tired and stressed and on our last gig I was so run down one side of my body suddenly went completely numb. I, of course, convinced myself I had a terrible illness and spent the whole of the performance thinking about whether I was about to drop down dead. When I got back and went to the doctor he just said, "Ms Green, I think you have been very stressed and need to just have a bit of a rest." Which I did, and it went away.

AP. What do you want to achieve with your poetry?

JG. I don't know really. I hope people enjoy it. I write a lot about education and politics so if it makes people think about the issues I'm talking about and fires people up to want to do something about it then that would be a good thing.
About the interviewer
Alexandros Plasatis is an ethnographer and writes fiction in English, his second language. Some of his stories have been published in Overheard: Stories to Read Aloud, Unthology, Crystal Voices, blÆkk, and Total Cant (forthcoming). He lives in Leicester.


Posted by Everybody's Reviewing at 05:17