Review by Jo Westwood of “Only Ever Yours” by Louise O'Neill 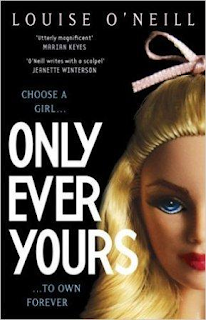 This review was first published here.

When I was eighteen, I read Margaret Atwood’s The Handmaid’s Tale, and it blew the bloody doors off my intellectual and emotional prison and opened up a whole new world of feminist consciousness. It changed my life. Only Ever Yours is the only book since that has repeated that moment in time in my personal history – and I think every young woman should read it. It’s searing, brutal and undeniably honest, and whilst set in a future dystopia, just like Atwood’s novel, it’s so woven from real events and behaviours it lays all society’s current failings bare for all to see.

frieda is sixteen, and has spent her entire life in the School, run by the chastities. All the girls are obsessed by their appearance – but in this future, the School enforces that obsession, by daily weigh-ins, a ranking system and lessons where the girls’ bodies are ruthlessly compared to those of their peers. Brainwashed since birth, the girls face a future either as companions – wives to rich men – or concubines. As the day of the Ceremony inexorably draws near, the day when their future role will be assigned to them, their competitiveness reaches fever pitch. But frieda is slowly failing, knocked out of orbit as one of the most highly ranked girls, by her former best friend isabel. Formerly #1, or queen bee, isabel seems to be on self-destruct, and as frieda tries to both help isabel and simultaneously distance herself from her, she’s making mistakes and getting noticed in the wrong ways. The consequences will be shattering.

This novel is brutal from the first page, and while the true horrors of their adult lives are only suggested, never fully revealed, O’Neill creates a very visceral sense of a claustrophobic community where there is truly no way out. Chickens get a taste of your meat girl… Atwood’s heroines were often passively complicit in their oppression, and in O’Neill’s novel, the ways in which women betray each other on a daily basis, thus enabling the power of the patriarchy to be maintained, are searingly dissected. frieda is not your average heroine either, not always sympathetic, not always likeable. And where other novels may have taken the romantic option (i.e. your knight in shining armour will rescue you), O’Neill plays it true to the end, in a truly haunting, terrible climax.

There is so much texture to this book, so much to devour and debate, so many clever allusions, all within a compelling plot populated by vivid characters. Having spent most of my career reading and critiquing Young Adult Fiction, I know that it's a very rich genre that pulls no punches and where nothing is out of bounds - yet this book really shocked me. It’s one of the most challenging Young Adult books I’ve read and certainly has the power to awaken feminist consciousness in teenage girls (and women), changing lives in the process. The cleverness is that despite the futuristic, dystopian setting, so many aspects of it are rooted in the realities of our world - from the celeb culture that makes girls focus on their weight, to the sexual slavery and brainwashing (and if you think that's far-fetched, well, it's happening all over the world right this minute). This is dystopian fiction at its best - taking reality and twisting the context so you actually see what is hidden all around you. I actually think it’s better than The Handmaid’s Tale – more cutting, more graphic, and more unflinching in its exposure of female relationships. Terrifying, haunting and compulsive, Only Ever Yours takes its place on my shelf of books that change your life. Superb.

About the reviewer
Jo Westwood is a librarian, editor, writer, gardener and geek who loves curling up with a good book. As her job as a specialist children's librarian means she reads at least one novel per day, that's rather fortunate, and her obsession with the novels of Phil Rickman in particular is praise indeed. She's currently working on creating a time travel device that will allow her to fit in even more reading, as there are far too many good books and rather less time in which to read them than she would like. Jo's blogs at aniseed.com.

Posted by Everybody's Reviewing at 01:18