Review by Sue Mackrell of "Hand & Skull" by Zoe Brigley 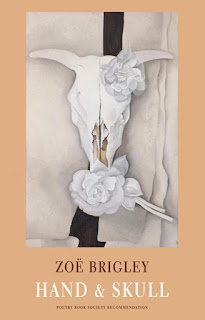 These are poems that leave a mark. They are

Zoe Brigley’s use of language is scalpel sharp in a collection which is wonderfully diverse in style and form. The delicacy and strength of Victoria Brookland’s ‘cut up’ images (‘I Too Am a Rare Pattern’) enhance and reflect the poems. There is anger and brutality but also beauty and tenderness. These are poems which cross boundaries. Hands are held out across time between women from myth, history and literature, and those today who are fighting for justice, humiliated by discrimination, silenced in courtrooms, and vilified in the press and social media. The lyrical horror of the opening poem draws on the Mabinogi, where honour codes and vengeance have disturbing contemporary resonances. An underlying theme of the collection is Celtic myth and the fragility of the veil between life and death:

Teens commit suicide in my home town: 25
dead, no older than 19. They hang
from ceiling lights and branches. Nothing to do

...We ride the Mari Llwd, star-horse of the frost,
her cranium stripped to yellow bone. Her head
lurches on a stick from house to house:

Violence against women is confronted and exposed. ‘Beatitudes for the Women’ draws on a language of abuse and legal discourse: ‘if you said yes once why not / sleep with one more’... a bus driver ‘hurrying you now to step / onboard lightly on the edge / of what is about to happen ...’ 'not long afterwards a man took/ photographs.’ The power of a photograph as a tool of violation is a recurring motif: ‘He opened the lens – and I did as I was told - / ....And he hung / me in pieces on his gallery wall’ (‘Letter from Georgia O’Keeffe’). ‘I said / Once there was this photograph of me / taken by a man / I loved ... It is the moment before / something terrible happens’ (‘Poem on the Edge’).

Several poems convey a chilling sense of women’s lives constrained by a need for constant wariness, for vigilance: ‘You know the women through every manmade thing / that men have used to trap them’ (Sonnet for a Hole in the Glass’). ‘I try not to look when I pass, though / they gaze at me with praise or disdain’  (‘The Amish Roofers’). ‘The garden gate creaks and someone is / behind me, always behind, but / don’t give in...’ (‘Beatitude for the Meek’).

‘Forgetting Poem’ addresses the hugely difficult issue of forgetting, forgiving, of striving for a neat ending where there is none. There are no answers, only questions about how to deal with denial, dismissal, self justification, or a meaningless claim of remorse in a society which colludes with the abuse of women:

A woman flew out to meet her rapist, a man
from another country, absent for years.
How liberating, she said, to forgive
and forget. But what if your rapist is not
a handsome man in a collarless shirt, not
close to tears, or poised to make it
up as best he can? What if mercy isn’t asked for
and cannot be given?’

‘The Eye in the Wall’ portrays an abuser: ‘Like looking / through a hole in the wall, he thinks of her again, / wonders if it was wrong, assures himself it was / right.’ But in a neat parallel, in ‘Sonnet for a Hole in the Glass,’ also based on contemporary court cases of rape and abuse, women are encouraged to ‘Punch a hole / in the glass: cracks spidering: ice too thin to carry / the weight of men: one eye to the gap just / wide enough for you to read their names.’

In ‘Vesuviennes,’ the redacted text suggests how those who challenge the system are silenced and erased from history. These 19th century French feminists were ridiculed and caricatured for their refusal to conform to gender expectations and for their transgressive dress: ‘ugly, comical, funny-looking, masculine ... women with monocles, cigars, and beards ...  men in skirts.’ Elsewhere in the collection are enigmatic, sensual, troubling and playful references to clothes. There is a ‘whalebone crinoline,’ a ‘bridal gown,’ a ‘mourning dress,’ and also ‘tiny shirt buttons,‘ ‘stockings and suspenders,’ and Katherine Hepburn’s ‘high-waisted pants.’

Images of transformation and shape changing are central to many poems. There are eagles, swans, horses, and ‘Syrinx, / the reed-woman, transformed into / a mournful sound: Pitys turned to pine, / rocked by the North Wind, and Daphne / who was at her end a sweet laurel. / We are all who have pleased too well’ (‘Dryad’). ‘Poem for Emily Doe’ paraphrases testimony from a witness in a Californian rape case: ‘Three nurses / prise flora and fauna / from her hair.’ The standard name ‘Doe’ assigned to give anonymity here takes on unintended resonances. Links between woman and nature are an ancient trope which permeates this collection of poems. In ‘Post Colonial,’  ‘She couldn’t blame the place where / it happened. The mountain, a blind / animal, innocent as any massive herbivore.’ The Welsh landscape has itself been violated by the ‘English cannon of colonialism.’ It is a place of bitter family feuds, where death is inevitable,‘the lamb we found dying in spring / snow. I covered the newborn thing with my coat, but the mother / ewe tore it away / with her teeth' (‘Letter on a Sheep Skull’).

Some of the most profound and heart rending poems in this collection are those about motherhood:

... I owe the world
for this boy, who knows the threading
of leaf veins, thrills at frogs, every moist
unfurling tongue that snaps on a whir...

‘Can I protect this emptiness?’ (‘He Has a John Clare Chin’). In ‘Swan’ there is pain at the impossibility of keeping forever a ‘fluffed head on my shoulder: tiny / toes cold against my leg.’ The poems of loss in this collection are deeply personal. They are deliberately made public; there are no gaps and silences here; these poems speak the unspoken:

Until I had children, no one told me
that not all of them survive, that some die
along the way.

And in ‘Letter from Nemi’:

... After eight weeks, there is some blood, and
clotted tissue, dark red and shiny like liver. You overdress
tastefully, patterned collusion brilliant against
your shiny white dress.

We hide the evidence, blot it out, make it tidy: ‘rain pulses shame.’ In the epigraph Claudia Dey suggests: ‘If we could perceive death as part of a pregnancy, we might just take women more seriously.’ For the men in this poem women are a distraction, a space to be filled: ‘Are women just a place / to put things?’ A woman has no right to refuse to be pregnant: ‘A woman died this week in Argentina, bled out inducing / miscarriage by tablet.’ This is a letter from the underworld, from Diana’s temple now beneath the lake. The moon goddess of birth and death, ‘a hunter / carrying arrows and a spear’ rides down oppressors. The poem ends with a haunting image: ‘a figure empty and white radiates in the blue storm light.’ In ‘Star / Sun / Snow’ children appear as natural phenomena, elemental beings:

1. Star
You were the second...
... your
head a pointed star trapped
by my pelvic bone, but they trimmed, sliced,
opened me up , and out you came screaming,
slippery with my blood.

2. Sun
You were the third, big and radiant
in my stomach ...
... I couldn’t rest until the warm clutch
of you was tucked beneath
my breast.

3. Snow
You were the first, the one not
born, seen once onscreen shivering with excitement, or
pain.
...Now flakes, spin,
melt on the warm earth. If you had lived, we would
have opened the door today, and I
would have said: Look, the snowflakes are
trying to come in.

‘Name Poem’ is eloquent and heart searing: ‘Your name sings a feathery thing in the hand: / ...How impossible to sing your name! / This name of yours, delicate as a kiss on the eye,/ this name that sings a long drink of sleep.’ It is a beautiful elegy for a child who will never see snowflakes but whose spirit will always sing in the heart.

An illuminating companion to this poetry collection is Zoe Brigley’s Notes from a Swing State – Writing from Wales and America (Parthian 2019) a collection of essays which give context and insight into the writing of these poems.


About the reviewer
Since gaining an MA in Creative Writing from Loughborough University what seems like a lifetime ago, Sue Mackrell’s poetry, short fiction and reviews have appeared in locations and publications as diverse as Leicester public toilets (an Everybody’s Reading initiative!) to Agenda Poetry. She is enjoying seeing the world anew through her four grandchildren.

Posted by Everybody's Reviewing at 03:06