Review by Neil Fulwood of "Plague Songs" by Martin Rowson 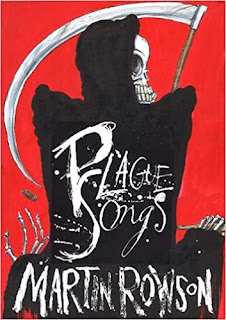 As a political cartoonist, Rowson has a distinct, immediately recognisable style. His images are exaggerated, grotesque, overblown but swimming with cruelly accurate detail: Brueghel meets Spitting Image, only funnier.

His poetry is not dissimilar. The longest piece in Plague Songs unspools across seven pages. The majority clock in at two or three. Most poets publish individual collections of around 50-60 pages; Plague Songs runs to over 260.

Rowson’s subject is COVID-19 by way of the first lockdown, government ineptitude, media inanity and the abject surrealism of being alive (but only just) during 2020. As he explains in the foreword, he wrote a poem more or less daily between mid May and late November, railing at anything from Matt Hancock to Death himself (several poems mourn the passing of a long-time friend), and in compiling them for Plague Songs an editorial decision was made to leave them in their original, often first, draft. Hence, the rough and ready, raw, sometimes self-indulgent, unmediated aesthetic that defines the collection.

They are also frequently offensive. When Rowson has a target in sight, be it a senior cabinet minister or the virus itself, everything is fair game and no quarter is asked or given. Nothing is off limits. The scatological becomes merely another poetic device. The language is saltier than that of a bad-tempered sailor with Tourette’s. Plague Songs is not for the faint-hearted or the easily offended.

What it most emphatically is, however, is the most honest literary response to 2020 that has yet to hit the bookshelves. It’s often said that we don’t get the heroes we want but the heroes we need. In Martin Rowson, we have that hero. Just don’t expect a cape or PG-rated content.

About the reviewer
Neil Fulwood was born in Nottingham, where he still lives and works. He is the author of two poetry collections with Shoestring Press, No Avoiding It and Can’t Take Me Anywhere, with a third forthcoming in June 2021.

You can read more about Can't Take Me Anywhere on Creative Writing at Leicester here.

Posted by Everybody's Reviewing at 13:25