Review by Tracey Foster of "Magnetic Field: The Marsden Poems" by Simon Armitage 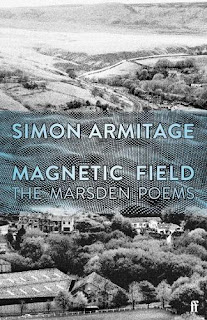 Sometimes we assimilate into the region that we are born into and sometimes it has a habit of permeating through us, long after we have left it. ‘Scratch my skin, I’ve got cinders in blood stream’: as a writer who is drawn to the north of my youth, I can fully empathise with Simon Armitage and his fifty-year relationship with a place that has been an inspiration and an echo that has woven through many of his poems. Watching the world from his bedroom window as a small child, his back to the moor, these ‘moonstruck observations’  were the seeds of inspiration that would come into sharp focus as an adult: ‘At night, the horizon brimmed with a darkness like outer space, crowding the corner of my eye, thickening and deepening at the back of my mind.’

This collection of fifty poems, entitled Magnetic Field, covers the span of his craft and contains some early unpublished pieces and some new poems written especially for this publication. Here, the landscape is revealed; even before the words can rush our ears, the land itself is offered as a visual prompt. The book jacket insides are decorated with a bird’s eye view of the topography that inspired the writer’s musing, a landscape that he calls ‘transcendent and transgressive.’ A graphic nib punctuates every dot of the moor and grassy knoll of the surrounding heathland, setting the tone before we delve into the punchy style of his prose. The River Colne, the canal and the inter-Pennine train line all cut through the granite outcrops that flank the small town, suggest a route out, a getaway to another life and possibilities that must have tempted the young aspiring poet. We are given specific markers on the map to place the poems within the land, honing our view right down to his dad’s greenhouse nestled behind a row of terrace houses:

When you disturbed them
The seeds of rose-bay willow-herbs lifted
Like air bubbles into the beam of light.
Then you’d emerge, a hoard of tomatoes
Swelling the lap of your luminous shirt.

The obsession with his childhood home, that he calls ‘a cathedral of the ordinary,’ is again and again a starting point for his recollections. We are taken on a sepia journey to his distant past and misdemeanours. His poem 'Privet,' based on a punishment of arduous pruning, dished out by his father to atone for some offence, ends with his young body lying prostrate on the bush, ‘floating there, cushioned and buoyed by a million matchwood fingertips.’ His parents are a tender refrain that punctuate the text, a working-class embrace that can’t be contained within a valley. He fondly recalls his mother,

at the twin-tub,
manhandling shirts,
hauling drowning sailors
from sea to deck.

With good humour, Samuel Laycock, ‘the other Marsden poet’ is recalled and used for textual intervention. He deliberately adopted the Lancashire dialect of the cotton workers in his pieces and is commonly known as the bard of the loom, the workshop and the mill. Similarly, Armitage lets his own voice flow through his poems too, and the voices of his parents lovingly nag in in dialect: ‘An imperial spanner and a saw so blunt, we could ride it bare-arsed to London.’

The passing of time and the passing of lives are felt keenly in the prose. We shift back to his thirteen-year-old self, leaving the house by the back door and returning as a man years later who asks, ‘How did it get so late?’ The past is ever present, the memories are keen, we watch, participate and feel each heartbeat counting the time. This ache of absence is tenderly felt, as the trivial becomes poignant on passing. Two poems about his dad face each other on the page, 'The Spelling' and 'Fisherwood,' and try to face up to the loss of those we love: ‘There’s no reply. I am too late. But every son carries a key / On a string, noosed around his neck.’

In one poem, Armitage is hauling a dusty Harmonium from Marsden church with his dad, whose smoker’s fingers and ‘dottled thumbs’ help lift the heavy load:

Him being him he has to say
That the next box I’ll shoulder through this nave
Will bear the load of his own dead weight.
And me being me I mouth in reply
Some shallow or sorry phrase or word
Too starved of breath to make itself heard.

From skimming stones across Black Moss to the tractor tyre let loose to roll freely from the moors through the main street, I thoroughly enjoyed this collection. With this homage to a northern life, I found affection for the child who’d spied his mother, crossing the street with a shopping bag, ‘nursing four ugly potatoes caked in mud,’ to the man under whose eyelids ‘northern lights and solar flares shimmer and rage.’  This is a loving tribute to a place that made him.

About the reviewer
As a teacher of Art and Design for over thirty years, Tracey has channelled her imagination into getting the best creative output out of others. She is now hoping to restore her creative mojo and has enrolled on the Creative Writing MA course at Leicester University. Last year, she completed the Comma Press short story course with Rebecca Burns and collectively published Tales from Garden Street. She is due to have first poem published by the Poetry Bus magazine and is currently working on a poetry collection.
Posted by Everybody's Reviewing at 12:16