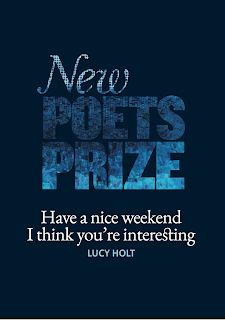 This pamphlet is eclectic and captivating. Described by Ella Frears as ‘sharp, surprising and very funny,’ its pointed couplets present a myriad of observations – from eyelash curlers and windsocks to Coronation Street – appealing to the reader to revisit these poems and see what else they can find in this box filled with random treasures.

The poet writes in short phrases or sentences, with focused images or ideas which are often tenuously tied together. Holt avoids punctuation, using line breaks to give just enough clarity for ideas or images to be interpreted and threaded together by the reader.

In ‘Blue light, morning,’ Holt concludes: ‘knowing things named for revenge / rarely bring it.’ It’s this kind of philosophy-in-passing which demands more than a moment’s consideration, and which allows these poems the space they need to resonate.

One of my favourite couplets features in ‘Timperley’: ‘I have loved men from the coast who cannot swim / I am always seeking a challenge.’ The irony here is marvellous, the phrasing deadpan. Is it the challenge of teaching these men how to swim, or the question hovering over the character of someone who lives by the sea but is not sufficiently equipped to enter it?

Black humour is also present in ‘COS woman’:

These two images stuck with me (I doubt I’ll again see a windsock without empathising with it). Holt is brilliant at capturing this dry wit on the page, but she’s also highly eloquent in her descriptions, which are every bit as precise, as in ‘Entertaining’:

The title poem’s interlinking couplets present a rather shocking image, which says a great deal about a relationship, self-worth and perhaps even abuse:

I am face blind apart from
you sometimes

and at night you roll me
across the wet grass

to a gentle stop
outside my mother’s porch

Ultimately, I loved Holt’s gift for concise imagery and her sharp wit which resonates throughout this pamphlet. I admire the control the poet displays, knowing how to piece seemingly conflicting ideas together and, in doing so, invite the reader to fill the gaps.

What really won me over is that, above all, I found this pamphlet personal and relatable. See ‘Lessons in gifting’:

What does it mean to be a woman today
reading the slogan lingerie for women who don’t do lingerie
wondering to what extent you do?
I have owned the same pyjama bottoms for a decade
there never was a shirt

The poet thinks of themselves as an oddity, with things not quite fitting. This is consolidated in ‘Birds as consolation,’ as Holt explores this sense of alienation further:

Yes, there is awkwardness here, but there is also intelligence and truth – as in ‘There is no word for this in German’:

This poet has to no reason to be jealous of birds for their direction or natural instincts – she possesses both in the careful, measured craft of her poems, which say so much about herself, the world, and indeed, our place within it all.

You can read a review of Lost & Found on Everybody's Reviewing here.

Posted by Everybody's Reviewing at 08:49