Review by Sally Evans of "Following Teisa" by Judi Sutherland 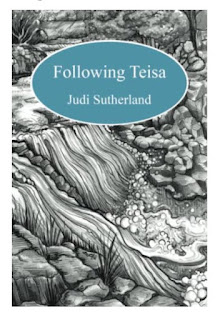 A powerful and confident poem that follows the River Tees from source in the Pennine moors to post-industrial Teesmouth on the north east coast, this is a perfect subject for Judi Sutherland’s abilities, with its exposition of largely unknown terrain, its clarity, smooth diction and scholarship. An almost unknown 1778 poem by Anne Wilson, Teisa, a descriptive poem of the River Teese, along the same lines, is its partial inspiration, acknowledged by including the original decorative title page of Teisa. Its other inspiration is the river.

The poet’s sympathy for the river, her curiosity about its landscape. towns and foibles, give the book an objectivity which some current poetry lacks. Here’s the Roll, a wave or bore:

She turns history and folk history into poetry:

At Croft, Durham loops leisurely
south into White Rose territory
and on this bridge, a delegation waits
to welcome each new Prince Bishop
taking possession of his estates,
presenting His Grace with the Conyers Falchion
the great sword that slew the Sockburn worm
who lurked within the river’s next smooth turn.

On the poem runs until it reaches the sea:

This poem is ninety miles long
and this is where it ends: the river
empties itself into infinite sea
….
One day these droplets will coalesce,
slip their airy moorings
touch the Pennines, sail the Tees again.

Judi Sutherland’s language is not northern. This adds to the freshness of discovery of this little-known part of England for some readers. Pen and ink drawings by Holly Magdalene Scott complete the presentation. It’s not just my own memories of the Tees in the quiet 1950s that attracts me to this work; there is a sense of a sympathetic intelligence following the river with a completeness only previously offered by Anne Wilson, whom Judi Sutherland honourably acknowledges.

About the reviewer
Sally Evans, retired Editor of Poetry Scotland, is in the later stages of a PhD in Creative Writing at Lancaster University. The resultant book, Wildgoose: A Tale of Two Poets, is published by Red Squirrel Press.
You can read a review of Wildgoose on Everybody's Reviewing here.
Posted by Everybody's Reviewing at 08:34