Review by Robert Richardson of "In Glad or Sorry Hours: A Memoir" by Alastair Niven 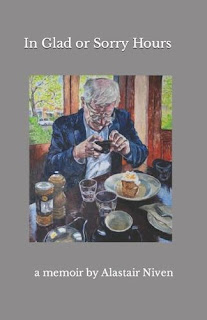 I first met Alastair Niven in 1988 when, as Director of Literature at the Arts Council, he provided me with a letter of support for the events I was organising, for the following year, to celebrate the 70th anniversary of the origins of Imagist poetry. This helped open doors to cooperation from The Poetry Society and the literature venue within the Royal Festival Hall. It was also the beginning of a friendship that continues to this day.

With a mere outline of his life—Dulwich College, Cambridge, Director of Literature at the Arts Council and the British Council, Principal of Cumberland Lodge (an institution with Royal patronage at Windsor)—it would be all too easy to dismiss Alastair Niven as a conventional establishment figure. Such sketchiness would be unjust and inaccurate, as his memoir makes clear. He inhabited these roles as an enlightened (small "l") liberal, but for a more complete portrait he was, and remains, a radical internationalist.

The book shows his defining experience to be early on, with the time immediately following his graduation from Cambridge spent teaching at a university in Ghana. This led to a strong interest in African literature, and it was also where he met his future wife, Helen, who provides the foundation of a happy personal life. Though mainly focused on his professional activities, the memoir also skilfully weaves in aspects of his family background.

His commitment to post-colonial literature was deepened through a doctorate from Leeds University and an academic post at Stirling. Subsequently, he left full time academia to direct the Africa Centre in London. Niven had the vision to combine a welcoming environment for African writers, and those creating in all art forms, resident in London, or visiting it, with solid policies and initiatives to promote their work and develop audiences.

Approaching the first twenty-five years of the twenty-first century, with diversity casting becoming standard in theatre, film and television, Niven, in his time as Director of Literature at the Arts Council in the 1980s and 90s, can be seen as a pathfinder for the consciousness necessary for this. He shifted funds to make sure they included black and Asian writers and supported placements that launched the careers of ethnic minority professionals in mainstream publishing. Wasafiri, a journal he initiated during his Africa Centre days, received Arts Council funding, and in 1994 his department helped bring about Out of the Margins at the South Bank Centre, the biggest celebration of black and Asian literature ever to take place in London. There was an "emphasis on the determination of writers from minority communities to be heard at the centre of British culture." These initiatives from the past are now a marker for the present and future, and this book importantly places them on record.

His relatively short time at the British Council was not so happy or productive, its structures limiting the number of positive impacts he could make. He was even cornered into closing libraries, with the poet Christopher Logue once saying to me "Alastair would want to be opening libraries, not closing them."

His final appointment as Principal of Cumberland Lodge became his "dream job." Its founding agenda was as a place for the discussion of ethical issues, primarily by groups from universities, although other groups visited too (one included a third of Britain’s Chief Constables). To these types of programme, he also added more emphasis on the arts.

Niven’s retirement is predictably busy, and he continues to show that an appreciation of a post-colonial world leads to the enjoyment of a better world.

About the reviewer
Robert Richardson is a visual artist and writer. His work appears in Artists’ Postcards: A Compendium (Reaktion Books, London) and Leeds Postcards (Four Corners Books, London), and it is included in collections of the British Museum and the Australian National Gallery. In 2021, he was a Residency Artist of the Digital Art Observatory: Ukrainian and British artists combining for online exhibitions, and in 2022 he was selected to present work at the first European Digital Art Fair. His website is here.
Posted by Everybody's Reviewing at 09:04