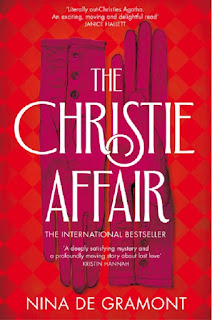 I don’t know how many people are familiar with the great event of December 1926 when Agatha Christie disappeared, feared kidnapped or worse, dead, only to be found days later in a spa hotel in Harrogate.

Many convincing explanations of the affair have been played out; that she had a nervous breakdown after learning of her husband Archie's affair and the recent death of her mother, that she was perpetuating a giant publicity stunt or that she had simply lost her memory. Many books have been written about the occasion, but none as fascinating as this,

The Christie Affair is a wonderfully written novel with so many layers interwoven into it that it is a joy to read. The main thread, an unrelentingly painful love affair, dominates, but with consequences that we could never imagine or in truth, understand.

The sights and sounds of 1920s London, Torquay and Harrogate are described evocatively and one can get lost in the descriptions as the hunt wears on. The police were desperate and it became the greatest manhunt ever known in the UK.

Now I’ve finished I wish I had read it more slowly but that would have been impossible as the various plot lines encourage the reader to turn page after page enthralled by the journey they are taken on. The author cleverly intermingles fact with fiction, but who would have guessed that her imagination would have taken her from the battlefields of World War I to the strict convents in Ireland and to the machinations of the police, the press and the woefully inadequate Archie Christie, who comes out of the story very badly.

There is a large cast of characters; each plays their part in a tale of murder and revenge that is so plausible, each given just enough space on the page to see them with credibility, not as some extra with a small role. Each character is vital to the plot and all is concisely explained at the denouement.

The story is beautifully written. We are taken hold of and gripped until the very end. We know what we want the outcome to be and are then shocked when the writer's truth is told. The writer: is it her words or did this happen? It is described as a piece of fiction, but then … who knows? Perhaps it is true.

Do read this and make your own mind up. I think I will read it again, just to make sure.

About the reviewer
Jon Wilkins is 67. He is married to the gorgeous Annie with two wonderful sons. He was a teacher for twenty years, a Waterstones bookseller and coached women’s basketball for over thirty years before taking up writing seriously. Nowadays he takes notes for students with Special Needs at Leicester University. He has had a work commissioned by the UK Arts Council and several pieces published traditionally as well as on-line. He has had poems in magazines and anthologies, art galleries, studios, museums and at Huddersfield Railway Station. He loves writing poetry. For his MA, he wrote a crime novel, Utrecht Snow. He followed it up with Utrecht Rain, and is now writing a third part. He is currently writing a crime series, Poppy Knows Best, set at the end of the Great War and into the early 1920s. Next year he takes up the UEA Crime Fiction Creative Writing MA. The game's afoot!
You can read more about Utrecht Snow on Creative Writing at Leicester here.
Posted by Everybody's Reviewing at 01:48