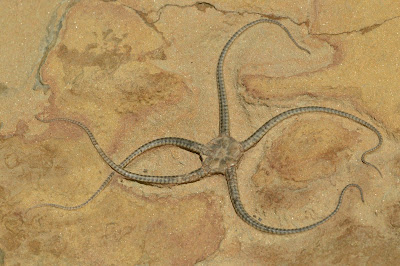 Fossil Sea Stars from the Geological Past

The fossilisation of any animal is an exceptional event. However, certain fossils are especially rare and are usually only found in rocks formed in particularly unique conditions. One such group of rarely fossilised animals are the sea stars, an attractive and recognisable group of invertebrates, with modern representatives being a common feature of rock pools and beaches the world over.

When viewed up close, a characteristic feature of sea stars is that they are composed of many tiny individual plates, and it is this specific feature that largely accounts for their relative rarity in the fossil record, as following death, more often than not they would have broken up into many pieces before they could be preserved as fossils. The specimen shown in the photograph is a beautifully preserved example from the well known fossil hunting area of the south coast of Dorset, and dates from around 190 million years in age. This area is also known as the Jurassic Coast and is famous for fossil marine reptiles and dinosaurs.

However, I am particularly interested in fossil sea stars over more than double the age of this one, dating to around 425 million years old! These fossils date from the Silurian, and are some of the earliest known representatives of this group of animals. I am currently researching a historically important collection of these fossils found in Herefordshire, which were first described by natural historians back in the 1850s. Prior to my current research, these fossils had not been extensively studied since the 1940s.

Many specimens have enigmatic names such as Furcaster leptosoma and Lapworthura miltoni, some named in honour of eminent palaeontologists of the time, and specimens can be found in museums from all over the world. One of the many attractions of studying these remarkable animals is their complex skeletal construction, and different species vary in many subtle ways. However, it is this very characteristic that also makes them particularly challenging to study. Owing to their small overall size (the photographed specimen is only around 7cm from arm tip to arm tip), specialised techniques for studying and imaging must also be employed, such as binocular and Scanning Electron Microscopy, and macrophotography, which only adds to the challenge. By restudying these beautiful and unique fossils, I hope to add to our understanding of the early evolutionary history of this special group of animals.

About the writer
Dave Gladwell has a long standing love of natural history, particularly in geology and palaeontology, and vividly remembers collecting fossils from Dorset as a child. He pursued his interest to obtain a doctorate looking at exceptional fossil preservation from Herefordshire, and is now working towards publishing this research. He also has a love of drawing and painting. When time permits he tries to squeeze in going to the odd gig or two, however hopes the many years of squealing guitars have not taken their toll too much on his hearing!
Posted by Everybody's Reviewing at 07:31