Review by Clurb of "The Realm of the Elderlings" series, by Robin Hobb 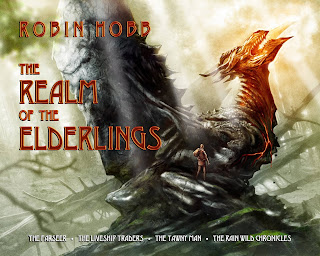 Robin Hobb has been writing her Realm of the Elderlings series since 1995 and she’s still going strong. This stuff is epic in the true sense of the word. I picked up a copy of Assassin’s Apprentice in January and have been ploughing through the series because I am loving this stuff.

But it’s hard work for the soul. Hobb has done some unspeakably good world-crafting, and she’s created characters that are deeply human and fallible and broken in all the right ways. Characters you worry about. Which is a great and mighty thing, except that what Hobb also excels at is placing those characters in situations overladen with unbearable foreboding. Running through the whole series is the theme of cycles. The bastard-assassin Fitz and his unknowable companion The Fool quest to alter the events of time to prevent history repeating itself. Meanwhile, the merchant traders of Bingtown join forces with the mysterious and disfigured Rain Wilders to lead the last of the sea serpents on the next step of their life-cycle, to complete their metamorphosis into dragons. As the wheels of time and destiny turn, Hobb writes beautifully enough to compel you to read on, despite the poor prospects of your most beloved characters.


It is very hard to succinctly review a book which is so intricately woven into the larger story of its series. Particularly when trying to avoid spoilers. But having just finished Fool’s Errand I’m appreciating Hobb’s ability to keep me reading more than ever. Our protagonist Fitz has aged and settled down to a slow life free of royal intrigue. When his old assassin-mentor comes to ask for his help at the royal seat, and his friend The Fool reappears unannounced, Hobb’s wheels of time begin to turn once more to drag Fitz back into the thick of his uncompromising destiny.


If it’s possible to recommend a book that left you weeping into the night, then I absolutely do.


About the reviewer
Clurb is an overly neurotic 30-something who finds reading delightfully compulsive. She lives in Braunstone, Leicester, with her husband, her two small daughters, and a black cat named Black Cat.
Posted by Everybody's Reviewing at 06:42