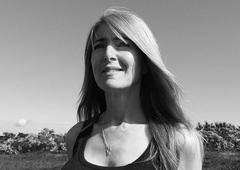 Kerry Hadley-Pryce was born in the Black Country. She worked nights in a Wolverhampton petrol station before becoming a secondary school teacher. She wrote her first novel, The Black Country, whilst studying for an MA in Creative Writing at the Manchester Writing School at Manchester Metropolitan University, for which she gained a distinction and was awarded the Michael Schmidt Prize for Outstanding Achievement 2013–14. She is currently a PhD student at the University of Wolverhampton, researching Psychogeography and Black Country Writing. Gamble is her second novel, and is forthcoming in June 2018. 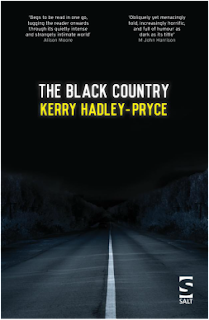 LW: Were you encouraged with your writing in the early days, and if so, by whom?

KHP: Yes, I was. Right from the start, I had a fascination with actual handwriting, and even before I could actually, physically write, my parents used to give me note pads, and I’d fill them with squiggles that I called "details." I must have been, what? Three years old? A little later, in primary school, I’d re-write fairy stories and read them to my parents, who were always keen. In my teenage years, I wrote voraciously: anthologies of poetry (one called simply "Snakes." Don’t even ask…), song lyrics, short stories, a novel about a failing pop group, and plays that I wanted (but never asked) my friends to perform. I went to a grammar school, which you’d think would have been great, but I hated it and became a bit disengaged. I was told by a visiting careers officer that I’d taken all the wrong subjects to be a writer or a journalist. I took her at her word and didn’t write for years.

LW: Should a writer be ruthless?

KHP: Oh, now, that’s an interesting question. I recently interviewed Kit de Waal, and she said those actual words. "Be ruthless," she said, when I asked her what advice she’d give to aspiring writers. I had to ask her what she meant, and she said, from her point of view, she’d made a decision about what kind of writer she wanted to be (successful) and what she wanted to write (best-sellers). I don’t see that as being ruthless. Single-minded, yes. I see "ruthless" as something else, something a little unpleasant. For me, I think, as a writer, you need to be serious about it. Like Kit, I think you need to make your mind up to be a writer, by which I mean you need to prioritise your writing as you’d prioritise any job of work. There’s nothing mystical about writing, it’s a job, it earns you money – and it’s a great job, too – but you have to do it really, really well to be "successful," and this includes more than simply sitting and writing, it includes self-promotion, events, tapping into all the social networks, being open-minded and enthusiastic, not being afraid to ask for things or organise things etc. etc. Far from being ruthless, I think it’s important to be organised, driven and productive. It’s also vital to be supportive of your fellow writers, and to seek their support.

LW: Had you written a novel before working on The Black Country?

KHP: Yes. Some terrible novels, too. Awful. Nothing published. Nothing worthy of publication, really. I was a secondary school teacher at the time and had started writing again because I kept having all these ideas that I felt needed to be written. I’d done an OU course in creative writing and loved it so I decided to study for an MA in Creative Writing at the Manchester Writing School, MMU. Really, studying was an excuse to give me time to write, and as part of my MA, I had to write an entire novel. I submitted it as a novel called Viewfinder, passed the course with a distinction and won the Michael Schmidt Prize for Outstanding Achievement, which still amazes me, even now. It was great, because I could workshop parts of the novel with my cohort, and received some interesting and useful feedback as I was writing it. That very novel later became The Black Country and was published by Salt Publishing.

LW:How long did it take you to find a publisher for The Black Country?

KHP: When I look back, I had a fantastic stroke of luck. It seems like all the cards were stacked in my favour. Nicholas Royle is a lecturer on the MA at the Manchester Writing School, and, at the time, I had no idea, really who he was, apart from that. He had always offered great encouragement to me during my course. When I’d submitted my final piece, I contacted him to let him know and to thank him for his encouragement and he asked me what I thought I wanted to do with the novel, whether I’d thought about publication or not, because, he said, he was, amongst other things, an editor at Salt Publishing … This was in 2014. After a few tweaks, and a change of title, the novel was published by Salt as The Black Country in September, 2015. Had I not done the MA, received the feedback from my student friends, or met Nick, it’s hard to say how long it would have taken me to ever be published.

LW: What is the best environment for you to write in?

KHP: I’m happy to say I can write pretty much anywhere. I’m not the kind of writer that has to have the desk facing south, candles or feng shui or anything. I read a lot of my stuff aloud, but I’m a well-known weirdo in my local coffee shop (i.e. it looks like I’m sitting there talking to myself) so that’s always a good place, but there are various places at home – I’m really not that fussy. Routine, I think, is more important to me than environment, I have to write every day (it doesn’t matter how much) so any external motivation is good for me. I started a PhD in Creative Writing last year, and so that’s good motivation (especially since my thesis requires me to write a novel) and I attend regular "open-mic" sessions where it’s important to have written something new to read to an audience (I recommend that, by the way: get involved in as many open-mic sessions as you possibly can – it makes you write new stuff and you get to see an audience’s reaction).

LW: How important is "place" in your fiction?

KHP: It’s possibly the most important thing. Both of my novels are set in the Black Country (and my PhD is psychogeography in Black Country writing, so I’m immersed in it academically, too). I realised when I was writing The Black Country that I am totally invested in "place" as a writerly "thing." I love this area. I love the griminess of it, the canals, the brutalist architecture of it, the sense of oddness about it. I think that unsettling quality is what I try to bring to my writing. I’m most comfortable with that.

LW: How soon after your first novel did you begin work on Gamble?

KHP: I’d started working on something almost as soon as I’d completed The Black Country, actually. But something interesting happened: within a month of publication, The Black Country received a particularly good review from The Independent. This was a very interesting time for me, because, as an instant result of that one single review (there had been plenty of others, but from bloggers and smaller presses) I suddenly started getting messages from literary agents wanting to represent me. I had absolutely no idea what a literary agent did, or whether I wanted or needed one, so I took some advice. Long story, but I decided to appoint Euan Thornycroft of A.M. Heath as my agent. I had been working on a novel, yet to be given a title, with a character called Greg Gamble in it, and I sent it to him. Pretty quickly, he got back to me saying he didn’t like it. I sent him a re-write of that novel five times. FIVE. Each time, the plot tightened up, and Greg Gamble gradually started taking centre stage as the protagonist. I am nothing if not diligent … Euan, however, wasn’t feeling it at all – in fact, he said (and I think this is pretty much a direct quote): "There are not redeeming features about Greg Gamble." But, see, that was the point. That is the point. And I felt there really was something there that he wasn’t getting. So, I sent it to Nick at Salt, asked him to be completely honest. I’m glad to say he liked it – enough to want to publish it. When I look back at those early drafts, they’re completely different to the finished product. This is a long, rambling answer to your question, isn’t it? In short: I started writing what became Gamble at the end of 2014, it was accepted for publication in the middle of 2017, and will be released by Salt Publishing in June 2018. (FYI, I started writing my next novel – yet to be given a title – in the middle of 2017. I’m aiming to complete this early draft by May this year).

LW: Which one novel would you recommend to an aspiring writer to learn from?

KHP: There are such a lot of excellent novels out there, aren’t there? The (slightly naff) answer is this: it depends. It depends on what kind of writer you want to be. One of my friends gets his bread-and-butter-earnings from writing romance novels for My Weekly. He read a load of them, got the brief from the publisher, got the formula in his head, and writes them, and he keeps up with any changes that are happening in that genre. I have several friends who are successful crime writers, who have done the exact same thing: read a lot of crime novels, got the formula in their heads and have written their own, but they keep up with the changes. For me, I love fiction set in the Black Country, so I’d recommend anything by Joel Lane, but particularly From Blue to Black. His use of description and sense of place is excellent, and the way he holds the reader firmly in this uncertain, unsettling, nervy place is superb. BUT, what I’m saying is, very clearly, you cannot be a writer without being a huge, massive reader. Reading is part of your job as a writer. And I think it’s vital to keep your head in the current game. So, today, I’m going to cheat, and suggest a second, more up-to-date novel, which is a best-selling debut (always good to read best-selling debuts, btw) and it really is brilliant. It’s called My Absolute Darling by Gabriel Tallent. Read it and see what the writer is doing to create such a fuss, look at the reviews, and work out why they’re so good. Oh, and enjoy. 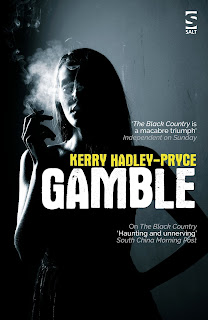 About the interviewer
Lee Wright was born in Nuneaton, Warwickshire in 1980 and has been writing both fiction and non-fiction since 2008. He is taking an MA in Creative Writing at the University of Leicester.

Posted by Everybody's Reviewing at 14:15