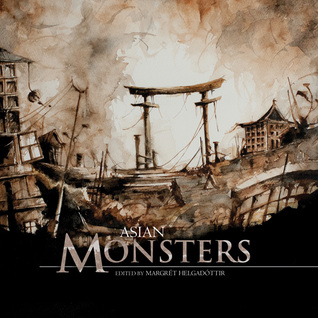 A collection of short stories edited by Margret Helgadottir, Asian Monsters finally gives monsters the diversity and representation they deserve. In a seemingly endless quest for more racial and cultural identities in literature, this collection gives us a hauntingly beautiful assortment of supernatural voices. As the final instalment of the monster collection published by Fox Spirit, preceded by European Monsters (2014) and African Monsters (2015), it similarly claims to give monsters a renaissance. It does this by portraying them outside the stereotypes of werewolves, vampires and the seemingly inherent longing for human interaction that dominates Western media.

Yap’s ‘Grass Cradle, Glass Lullaby’ quickly became a personal favourite. It depicts a vampiric monster based on the Filipino tiyanak. This expertly woven story conveys the loneliness of a mother without a child, and the horror and obsession it can breed. This narrative was rich in pathos, evoking a bitter understanding of the darkness of the protagonist.

Terminiello’s ‘Aswang’ gives the monstrosity of the aswang a place in reality. It works through the day and hunts through the night. The aswang brings together the people it attacks, evoking poignant scenes between the titular characters. They overcome social decorum that divides the privileged and disadvantaged. Despite the tenderness this implies, the actual aswang elicits spine-chilling terror, leading you to rethink who you can really trust on public transport.

Though these stories are primarily about monsters, they are also about love. Love is warped, twisted and crosses boundaries. An example is ‘Kokuri’s Palace,’ where the protagonist helps the kokuri wearing his former lover’s skin to weave ornaments out of human hair. The stories are indeed chilling. Yet, each is unmistakably infused with themes of love, home and change. These themes intertwine, showing that monsters, much like humans, seek belonging. Sometimes home isn’t a place or even a time, it’s the people around you. People intermingle with monsters, until they become interchangeable. The apparent similarities highlight important injustices not only of the fantastical and the supernatural, but also in our own realities. Asian Monsters reveals issues of patriarchy, colonialism, privilege and poverty prevalent in many societies and challenges us to fight them.

I never thought I’d say I’m glad that even monsters have their place in the world, but as I read the sentence back I am hit by its truth. The cultures represented in this book, Filipino, Japanese, Indian Hindu mythology, Vietnamese and many more, have long been silenced and erased in Western literature. Their stories remain secluded, and we as readers who seek this representation are forced to dig through a plethora of Western stereotypes and overdone white-monsters. Asian Monsters empowers these cultures, giving them a diverse identity and voice in the supernatural literary sphere. Asian Monsters has united these masterfully composed stories giving these monsters a well-deserved place in the world, truly bringing them to life, even if some of them are undead.

About the reviewer
Amirah Mohiddin, born in Birmingham U.K, is an MA Creative Writing student. She specialises in fantasy, speculative fiction and magical realism.

Posted by Everybody's Reviewing at 07:40