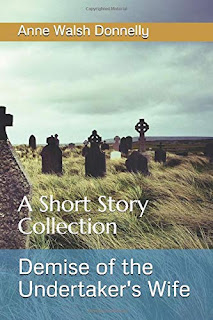 The world of Anne Walsh Donnelly is indeed a dark world. In these stories the common themes are of death and loss, prison and what keeps us all behind metaphorical bars, darkness and sadness in relationships - relationships that seem to work or fail between mother and son, mother and daughter, widow and widower, gay and lesbian couples.

No one seems to come out of the stories in a more positive state than when they entered, except perhaps in 'WLTM' when a widower Jim puts out a lonely-hearts advert and is matched with his golfing buddy, Frank - a neat twist that offers a brighter future for both protagonists.

Unfortunately, they are alone. In 'Iscariot' and 'Inside' we see the protagonist kill, because it is safer for him in prison as this is the world he understands, and also because, as a probable schizophrenic, he cannot help himself, so he kills his prison guard when disappointment enters his life.

It is disappointment that is at the heart of most of the tales. In 'Goodbye, Mr. Fox,' Luke feels betrayed by Damian when he wants to sell the farm that he has leased for the whole of his lifetime. When he discovers the real reason, he understands, and the undercurrents of gay love rise to the surface. Will the disappointment mean he can then find a better life or is he cursed to the troughs of depression that seem to welcome him?

In 'Our Mothers Lied. That’s the Truth,' lesbian nun Elizabeth feels her life’s principles are being eroded as she feels the Mother Superior, in taking away her teaching job at the convent, is in some way punishing her for her sexual relationship with fellow nun, Theresa. To look after the demented Concepta and other ailing nuns is now her fate, until the temptation of the job of Mother Superior in the future is raised and Elizabeth gives up all her principles for that hope.

Though they share common themes, all the stories are different. All are dark, from murder to incest, suicide to fraud. It is not a pleasant world that Anne Walsh Donnelly writes about, but it is a real world and we can see the truth in every word that is written. This is our world and the darkness is described perfectly by Anne Walsh Donnelly. The troubling thought we are left with after reading the collection, Demise of the Undertaker’s Wife, is that is this all we have to look forward to?

Jon Wilkins is sixty-three. He has a gorgeous wife Annie and two beautiful sons, and loves to write. He is a retired teacher, lapsed Waterstones’ bookseller and former Basketball Coach. He taught PE and English for twenty years and coached women’s basketball for over thirty years.  He has always loved books and reading.
Posted by Everybody's Reviewing at 04:46