Review by Robert Richardson of "Into the Night: Cabarets and Clubs in Modern Art" exhibition at the Barbican Centre, London, 4 October 2019 - 19 January 2020 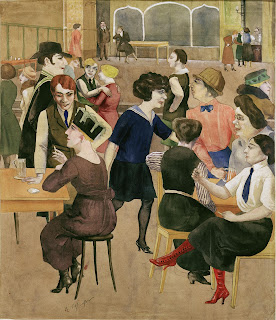 
This Barbican exhibition ranges over both time and space: from the 1880s to the late 1960s, and includes diverse locations. While it is predictable that capital cities such as London and Rome are present, there are some welcome and revelatory surprises with the Ibadan and Osogbo Mbari Clubs in early 1960s Nigeria, and, later that decade, the Rasht 29 Club in Tehran.

Clubs and Cabarets offered a format for bringing together different art forms, and on show is an enjoyable mix of dance, performance, music, film, and poetry. In 1880s/90s Paris, the Chat Noir also presented shadow theatre, notably by the artist Henri Rivière, and the Barbican majestically displays his intricately cut zinc silhouettes and their accompanying shadows.

The exhibition includes examples of where environment itself was an active art form: the decor and furniture creating a desired aesthetic. The Cabaret Fledermaus in Vienna reflected both the Art Nouveau of the Vienna Secession and Expressionism, movements that occurred during the period of its existence, 1907-13. In one of the spaces, there is a reconstruction of the Cabaret Fledermaus’s Secessionist tiling, and the result is a vibrant visual stimulation.

On occasions there were aspirations towards “the total work of art,” as with Theo van Doesburg at L’Aubette in 1928. For the interior design, he brought to Strasbourg the influence of the Dutch De Stijl movement and exuberantly announced “the beginning of a new era in art.” He promoted  “Ciné-Dancing” by merging dancehall and cinema, and the disorienting effects might be seen as prefiguring the immersive experiences of Virtual Reality produced by today’s digital technology.

In 1916, Dada at the Cabaret Voltaire in Zurich was not about meticulously constructing an aesthetic, but an avant-garde opposition to cultural conservatism. The insanities of the First World War surrounding neutral Switzerland were met with anarchic absurdities and provocations. The photographs of a soulful Emmy Hennings with one of her puppets and Hugo Ball in his ridiculous looking bishop’s costume are important documents, while the experimental poem taking up an entire gallery wall emphasises Dada’s stretching of language to the borders of incoherence. The curator, Florence Ostende, also made a good decision to include a monitor showing a 1967 film reconstructing a sample of Cabaret Voltaire performances. It was made while they were still within living memory by Marcel Janco, someone who participated in those extraordinary events that lasted just a few months but have a continuing influence.

The aftermath of the war led to the more focused and biting political satire in the cabarets of 1920s Berlin, with women artists, including Dadaist Hannah Höch, playing a leading part. In this section, the film of the expressionist performer Valeska Gert is remarkable. She used the movement of her body and a psychological intensity to identify with those marginalised by society, and was later to comment “Because I didn’t like solid citizens, I danced those whom they despised - whores,  procuresses, down-and-outers, and degenerates.”

The series of discrete spaces that make up the upstairs galleries of the Barbican’s exhibition area are not conducive to a flowing display, but they are usually programmed in ways that play to their strength. They are ideal for this exhibition, since each space can be dedicated to a particular place. This collaboration with the Belvedere, Vienna (where it will be showing in 2020) is impressively researched, and gives recognition to some of the lesser known figures who designed the posters and ephemera for an often edgy art and culture that brought celebration and imagination to the hours of darkness.


About the reviewer
Robert Richardson is a visual artist and writer. His work is included in Artists’ Postcards: A Compendium (Reaktion Books, London) and Leeds Postcards (Four Corners Books, London). He has graphic artworks in collections of the British Museum and the Australian National Gallery. In 2018, he had a solo exhibition of photographs, Luz Brilhante, at the Museu Municipal, one of the leading museums in Faro, Portugal. He is also the co-editor, with William Pratt, of Homage to Imagism (AMS Press, New York).
www.bobzlenz.com

Posted by Everybody's Reviewing at 07:47