Review by Kathy Hoyle of "Among These Animals" by Gaynor Jones 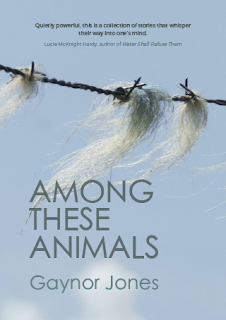 Among These Animals is a searing novella-in-flash, as brutal as it is beautiful. Jones handles this niche form with exquisite expertise, weaving each story seamlessly into the next with perfect fluidity.

Set against the sweeping beauty of rural Wales, Jones’s compelling narrative is a visceral, powerful exploration of complex themes including sibling rivalry, parental love, familial loss, guilt and grief, all told through the eyes of Carys, the eldest daughter of farmers, Derfel and Aelwen.

Carys is a daddy’s girl who thrives on the gentle guidance and acknowledgement of her reserved father, a man continuously surprised by the colossal weight of love he feels for his daughter. Cerys hero worships him, and he adores her. Her mother, Aelwen, often fades into the background.

The familial relationships are established beautifully by Jones in the opening stories. In 'Heavy Is the Head That Wears the Crown,' Derfel tells Carys the story of how he met her mother but Carys struggles to see her mother’s worth: 'Carys tries to picture her mother as a princess from one of her books … She can’t. She can picture her father easily though, with a crown on his head and a staff in his arms. As she falls asleep, courtiers bow around him.'

We hear how the idyll is threatened, with the arrival of three younger brothers, 'Owain and the twins' in 'Pecking Order': 'Carys … has sworn a lot more in the years since her brothers arrived … When she was the only one, breakfast was all for her. Warm bubbled crumpets dripping with greasy butter … But that was before the stupid boys came along. Now, Carys has to sit last at the table … Carys has to be last in everything except cleaning and tidying.'

One day, a devastating event alters everything, tearing the family apart and shattering Carys and Derfel’s relationship forever. Jones delves into the themes of guilt and grief with poignancy and precision, taking the reader on a heart-breaking journey as the family try to come to terms with their loss.

Throughout the novella, Jones showcases her inimitable style, either by pushing the boundaries of social acceptance, with stories such as the disturbing title story, 'Among These Animals,' or by showcasing her exceptional ability to leave the reader reeling with her emotional sledgehammers, often wielded in stories that are just a few paragraphs long.

Among These Animals is tremendous debut novella-in-flash, powerful and poignant. It will leave the reader stunned.

About the reviewer
Kathy Hoyle is an MA graduate from the University of Leicester. Her short stories and flash fiction have appeared in a variety of literary magazines such as Virtualzine, Silver Apples, Reflex Fiction and Lunate. She has been shortlisted for the Exeter Short Story Prize, the Fish Publishing Memoir Prize and the Ellipsiszine Flash Fiction Collection Prize. She recently received a Special Commendation in the Blinkpot Awards and won Third Prize in the HISSAC Flash fiction Competition. She is currently working on both a novella-in-flash and a short story collection, powered by tea and biscuits.

You can read more about Gaynor Jones's Among These Animals on Creative Writing at Leicester here.

Posted by Everybody's Reviewing at 07:57