Review by Tracey Foster of "Driftwood by Starlight" by Caroline Gill 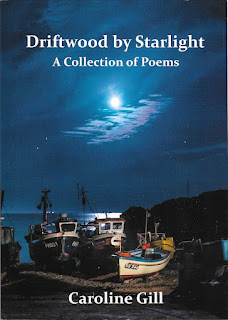 Caroline Gill has been lucky enough to have lived in some beautiful places over the years, Suffolk, Kent and Swansea to name a few. These coastal settings have given rise to an undertow of nature that whispers within her poems and at times takes the centre stage. Her passion for the environment and dismay at the turning tide is evident in 'Puffin’s Assembly' and 'Raft Race.' Together with her archaeologist husband David in their present home above Swansea Bay, they can watch the beam of the Mumbles lighthouse and see the expanse of Exmoor in the distance. So, like the moors and waves that surround her, the impressive might of nature surrounds and permeates the poems: ‘Watch a scroll of rippled words extend / Beyond the cove as surf and stars collide.’

Working with her husband on an archaeological dig in Rome in the 1980s, she spent time washing bones and pottery fragments - a theme that has found its way into two of her poems, 'The Ocean’s Tears' and 'Ice-Blue Blood,' which refer to Homer’s The Odyssey. The two poems face each other in the book, and are not connected but draw from imagery in the tale of Troy. This ability to look at her everyday surrounds from different perspectives enables her to assimilate fragments of stones, bones and embed suggestive imagery for the reader.

This collection of poems features some that have been broadcasted and published in other anthologies as well as being heard at readings in poetry festivals from Hay to Aldeburgh. The confidence in her voice is evident when reading the text; she speaks directly to the reader and appeals to the humanity within us all: ‘What causes us to go on standing by? / Our fenland spider pools could soon be dry.’

Caroline writes a wildlife blog and is an active campaigner for wildlife conservation. This collecting and cataloguing of images helps to shape her words into simple, effective snapshots. The reader is drawn to see an image, picked out with alliteration and rhyme:

A shadow hovers in the midge-cloud air
As mountains drift or disappear from view.
A watercolour wash, applied with care,
Rolls on waves of glass; its turquoise hue.

A visit to the gallery admiring the work of Turner and Hepworth inspires the poem titled 'Afternoon with Alfred Wallis.' Scrutinising the brushwork and craft of the sculptor’s chisel leaves her in awe of the artform, but she too is welding her artistic craft with a pen. For instance, she leads the reader to feel the weather as an immersive experience:

A belt of lashing rain tears strips of blue
And indigo from fleeting rainbows; white
Grenades explode as gannets pierce the sea

I thoroughly enjoyed this collection of poems and was buoyed by her call to arms to defend the landscapes that we have and be passionate about the wildlife in them.

About the reviewer
Tracey Foster has been teacher of Art and Design in schools in Leicestershire, Northamptonshire and Rutland for over 40 years. She took part in the Comma Press short story course in 2019 and had a short story published in a collection, Tales from Garden Street. She had a poem about Covid published by BusPoetry Magazine and has since commenced an MA in Creative writing at Leicester University.
Posted by Everybody's Reviewing at 08:31