Review by Tracey Foster of "The Ormering Tide" by Kathryn Williams 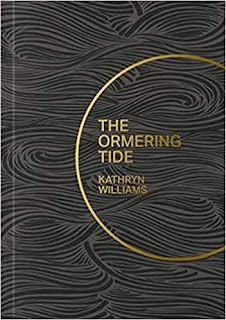 Mercury music prize nominee Kathryn Wiliams is a successful singer / songwriter who has tuned her musical ear and channelled her creative flow into creating this first novel. The sea ebbs and flows through this coming-of-age story and just as the abalones are uncovered with the low spring tide, so too secrets and truths are gradually revealed to the tight-knit island community. 'Ormers, also known as ear shells, are abalones that can only be accessed to harvest on big spring tides. You may catch ormers on the day of the new moon, and two days after that.'

Rozel lives with her parents and triplet brothers in a small cottage in a bay on one of the Channel Islands. The small community that lives there go out on the shores at the ormering tide to collect the shells and work together to harvest the bounty. The events following her eldest brother’s accident leave the community fractured and rumours begin to break their bonds. Rozel uncovers the truth of the accident by piecing together fragments of conversations overheard as she wanders the island and spends time with her elderly neighbour - collecting memories like picking shells off the beach.

Williams laces the narrative with echoes of menace and weaves an undercurrent of threat that keeps the reader guessing who the perpetrator is. The claustrophobic setting of her family life holds us close to the narration and we eavesdrop on snippets that help us come to our own conclusions. ‘My life was like a bowl, filled each new day. The sloshing around of the same faces, the same concave world, filling in and tipping out.’

Sounds play an integral part of the aural experience within this novel. Williams cleverly uses the sounds of the sea, wind, grasses, stones on the beach to frame her settings. This roots us in the landscape but also whispers at us from the side-lines as if suggesting other conversations: 'The shell sounds of oceans, whistling around and up. Twisting inside like an ear to the ground.'

After the accident, her brother is unable to speak and she becomes his voice, translating the incomprehensible babble that streams from his mouth. This raises her from the bottom of the order of hierarchy in the house, as she becomes essential in communicating his thoughts to the nurses and his parents. This link between ears and shells, listening and retaining sounds within, plays well with the theme of the novel. Her best friend Bunny also has a speech impediment that echoes the sound of the sea that surround them: ‘The whispering licks of the wind in dry grass, the circling of dry sand in swirls. The wind at the top of the cliffs rushing past the holes in my ears, all had the same lisp.’

Readers will be swept along with the narration and stung with some uncomfortable truths - similar to how Rozel says ‘the sand would whip up with the wind and hit our legs like little pins.’

As well as a successful musical career, Williams has worked with other poets at writing retreats and has collaborated with Carol Ann Duffy to produce a piece about the Waterloo massacre. She was given a New Writing North commission and was the poet in residence at Alnwick Garden. The Ormering Tide is her debut novel, and she continues to produce music on her own record label, CAW records.

About the reviewer
As a teacher of Art and Design for over thirty years, Tracey Foster has channelled her imagination into getting the best creative output out of others. She is now hoping to restore her create mojo and has enrolled on the Creative Writing MA course at Leicester University. Last year, she completed the Comma Press short story course with Rebecca Burns and collectively published Tales from Garden Street. She has had her first poem published by the Poetry Bus magazine and is currently working on a poetry collection.
Posted by Everybody's Reviewing at 08:51