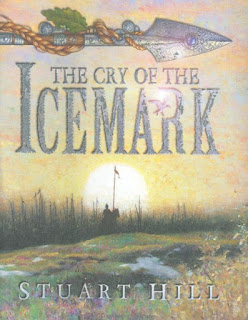 This is a thrilling fantasy novel from Stuart Hill's acclaimed Icemark series. Written mainly at the tills of Waterstones in Leicester during the stores quiet times, this is an epic contribution to the fantasy world. The book was reissued mid-Covid and is well worth a read.

When her beloved father dies in battle, the fourteen-year-old Thirrin becomes Queen of the Icemark, a tiny kingdom situated between dangerous neighbours. Thirrin needs to raise an army to protect her people from the seemingly invincible Imperial invaders. She searches for allies far beyond her kingdoms borders, and meets former enemies in the Land-of-the-Ghosts and the frozen Hub of the World. But the one question that haunts her is: can she save her kingdom?

Thirrin is a true Warrior Queen and a major force in Hill’s fantasy world.

It is beautifully written, a true page turner that rampages across the pages, drawing the reader into the story, delighting them as they enter the vivid imagination of Stuart Hill.

About the reviewer
Jon Wilkins is 66. He is married to the gorgeous Annie with two wonderful sons. He was a teacher for twenty years, a Waterstones bookseller and coached women’s basketball for over thirty years before taking up writing seriously. Nowadays he takes notes for students with Special Needs at Leicester University. He has had a work commissioned by the UK Arts Council and several pieces published traditionally as well as on-line. He has had poems in magazines and anthologies, art galleries, studios, museums and at Huddersfield Railway Station. He loves writing poetry. For his MA, he wrote a crime novel, Utrecht Snow. He followed it up with Utrecht Rain, and is now writing a third part. He is currently writing a crime series, Poppy Knows Best, set at the end of the Great War and into the early 1920s.
Posted by Everybody's Reviewing at 09:46